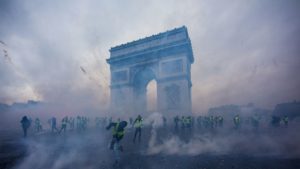 No folks, this picture is not from a movie. This is the Arc de Triomphe in Paris a few days ago. Quite different from the monument I visited 20 years ago. I took the elevator to the top and looked out over one of the most famous streets in the world. The Champs Elysee. Home to LaCroix, Chanel, Dior. Now filled with broken glass, burned out cars and rubble. 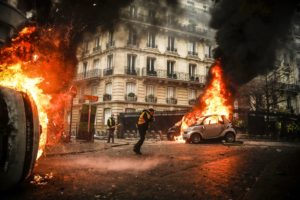 But we aren’t supposed to know about this in America, are we. Not even Fox News hit on it very hard. Just a minor blurb. After all, they don’t want us Deplorables getting any ideas. Revolutions are not condoned in the US unless tea is dumped in Boston harbor.

France was ripe for another though. Brought on by socialism and of course the man who married the Mary Kay Letourneau of France, Emmanuel Macron. First we heard the reason was the green tax imposed by the Paris Climate Accords, just like the increase in the cost of subway fares in Brazil five years ago.

But it’s never just about the *tax.* The *tax* is the catalyst for an absolute major backlash because of the burden of government. Why else would Parisiennes chant “we want Trump.”

France, America isn’t going to bail you out again. LEARN. Half our population was fed up with the former regime we had before President Trump. Elections have consequences and our cops would never be seen like this. 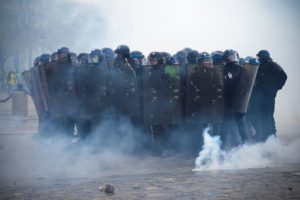 And the perfect cartoon I just saw this morning which says it all.

Since the US media not showing any of this, Thank you, Carol