.
Yup, you’ve heard it before, and you’ll hear it again today.  YOU (personally) are destroying the Earth!  Bad human!   Bad!!!
.
As a by-product of your existence – you harm the planet which nurtures, feeds, and loves you (and loves you without measure).  Without YOU the Earth will be a beautiful, natural, vibrant place full of wonderful animals which will live harmoniously together, hug each other, run playfully, and frolic endlessly across fields full of wild flowers, orchids, and the occasional bit of broken concrete and brick-front where the Wendy’s fast food joint stood just several thousand years earlier (a remnant left from the bad old days of…  Humans).
.
Ah, what a wonderful world it will be when we quit stinking up the joint with our constant carbon-heavy presence!
.
Too bad we’ll never be there to enjoy it, you know, because we’re all be gone…
. 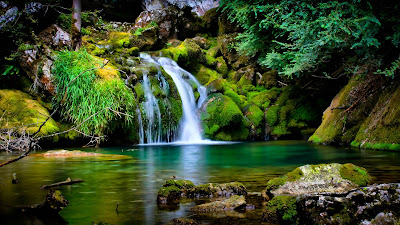 .
.
Okay, now that you’ve had your moment of Zen, it’s time to get to the actual topic of the post, which I’ll get to with great haste.  The introduction above was for the benefit of those deluded humans who HATE themselves (and you) for being born, and, just to keep the record straight (and also so they won’t feel so completely alone)…
.
I HATE them too.
.
I don’t know about them, but I sure do feel better for saying / typing that out loud.
.
Today’s oft-deferred post IS actually about Climate Change.  No, no, no, not Man-Made Climate Change (for more detail on ‘MMCC’ reference any speech made by President Obama in the past two months since Terrorism has become ‘popular’ again), but I am speaking specifically about your basic “Earth-Made Climate Change” (feel free to use this new terminology just to tick the glassy-eyed ‘Earth Firsters’ off).
.
I came across an article which warmed me to my very core.  It was based upon ‘Science’ (and as you know, 97% of Scientists agree that ‘Science’ is ‘Cool’ and chicks LOVE the pocket-protector and white lab coat!) unfortunately, this particular bit of Science presents a conundrum for the planet-hugging folks on the Left because, well, while it IS science, it’s not science that they will approve of…
.
It won’t allow them to pull money out of your pockets.

An ancient tropical forest found in Svalbard, a Norwegian archipelago in the Arctic Ocean, may explain one of the most dramatic climatic shifts in Earth’s history. Some 400 million years ago, Earth’s atmosphere witnessed a 15-fold reduction in carbon dioxide. Climate scientists have long tried to account for the drop.
.

Some scientists believe it was the rise of forests just like the one found in Norway that precipitated the change. As the planet came to host large plants for the first time, the mighty tropical trees sucked millions of tons of CO2 from the atmosphere.
.
The newly unearthed forest — dated at 380 million years old and with its tree stumps preserved still in their upright positions — may mark the beginning of the transition from small plants and grasses to large tree forests.
.
“These fossil forests shows us what the vegetation and landscape were like on the equator 380 million years ago, as the first trees were beginning to appear on the Earth,” researcher Chris Berry, a professor of earth sciences at Cardiff University, said in a press release.
.
Over the course of the ancient forest’s long existence, the now-frozen trees have enjoyed a lengthy journey. During the Devonian period, 420 to 360 million years ago, the Norwegian archipelago was part of Laurasia, one of two supercontinents along with Gondwana. The ancient trees grew up near the equator, several hundred miles south of their current home.
.
The forest’s discovery supports the theory that the emergence of forests led to a drop in CO2 levels. In addition to sucking up more carbon dioxide, the tall trees also helped block out more of the sun’s radiation. Slowly, the planet cooled to temperatures closer to today’s. .

So, Chris Berry, Earth Sciences Professor at Cardiff University, reports that the Earth’s Climate HAS changed, continents have shifted, and temperatures / CO2 levels rise and fell over the past 420 MILLION years without the intervention of…  Man???
.
What manner of dark sorcery is this?  Who does this dude think he is?  White lab coat or not, somebody needs to have a talk with this guy because he is using the scientific method in describing Earth Made Climate Change.  If our President has anything to do with it, they’re going to pull this guy’s Pocket Protector, and repo the Lab Coat.
.
It’s a shame, really, Professor Berry seems like a guy I’d like to have a beer with.  Unlike this guy…
.

.
“I’ve come here personally, as the leader of the world’s largest economy and the second-largest emitter, to say that the United States of America not only recognizes our role in creating this problem, we embrace our responsibility to do something about it.”
.
…
.
“Here in Paris, let’s also make sure that these resources flow to the countries that need help preparing for the impacts of climate change that we can no longer avoid. We know the truth that many nations have contributed little to climate change but will be the first to feel its most destructive effects. For some, particularly island nations — whose leaders I’ll meet with tomorrow — climate change is a threat to their very existence. And that’s why today, in concert with other nations, America confirms our strong and ongoing commitment to the Least Developed Countries Fund. And tomorrow, we’ll pledge new contributions to risk insurance initiatives that help vulnerable populations rebuild stronger after climate-related disasters.”  – President Barack Obama, November, 2015
.
Does it seem strange to anyone besides me that the President ALWAYS seems to make it ‘about him’ while managing to yet again blame America (you name it POTUS, we’re guilty as sin) in his opening remarks?  And then to show his gratitude for being invited by the U.N. he spoke for 14 minutes, roughly 11 minutes longer than the U.N. requested.  I wonder how much CO2 he added to the environment from this single speech?
.
And what will our ‘commitment’ to the Least Developed Countries Fund cost us ($248 MILLION – sorry, I had to look), knowing that we don’t have enough health providers (or funding) to support our Veterans and protect our borders?
.
If I were writing the check, which in reality, all of US are – I would prefer to support the people who protect and defend our Nation, rather than those who are looking to shake US down for cash for perceived injustices over the past four hundred years.  WHY do we need organizations like Paralyzed American Veterans and Wounded Warrior Project?  Shouldn’t the Federal Government be providing the necessary care for our wounded Veterans?

And if the organizations are necessary, then might each of these organizations benefit from a $125 MILLION cash injection to care for our Veterans?  Yeah, that’s what I thought…