Over the past few weeks you may have heard about several videos released by the The Center for Medical Progress which captures ‘CMP’ undercover staff arranging and haggling for the procurement of ‘body parts’ from Planned Parenthood representatives. .

I would like to say that I was surprised by what I saw, but when you consider what Planned Parenthood is after all, well, its stock and trade is… Death. .

They are to ‘parenting’ what Jack Kevorkian was to ‘long term health care’. .

I don’t mean to shock anyone, but the current iteration of PP is wholly consistent with Margaret Sanger’s vision of the organization. Planned Parenthood was created to remove the weak, the poor, the addled, and the undesirable from our society. .

Oh no, that’s not me saying it, I found excerpts from her speeches and writings and included them in a post entitled, “Meet Maggie!!!” back in 2012. If you read it, you might wonder WHY the Federal Government provides about a HALF A BILLION dollars in funding to this organization at all. Unfortunately, this organization, firmly rooted in the concept that all men are NOT created equal, has been a darling of the Progressive movement for over one hundred years. Yeah, let’s send them some cash for doing ‘God’s Work’…

To a Liberal Progressive, any attack on Planned Parenthood means that you are a hater women, that you want to deny them ‘rights’ over their own bodies, and that you cannot manage to keep yourself out of their gosh darn bedroom!!!..

Okay, fair enough, but then, might it then be equally fair to say then that if you SUPPORT Planned Parenthood it may also mean that these witless supporters of Eugenics are best described as Racists, Nazis, Genetic Purists, and proponents of Infanticide? .

Yes, I believe this would be fair to say. After all, if you’re not ‘Pro-Life’, you’re not really the politically correct ‘Pro-Choice’ flavor of citizen, now are you? You’re actually more of a, oh, I dunno, how about, a ‘Pro-Death’ kind of guy / gal? See if that works for ya. .

Sanger, Parenthood’s founder, was a well-known Eugenicist, believing that she, and others, could control the future of a society by determining the genetic make-up of that society through selective culling of the population. Undesirables, as determine by Eugenics proponents were to be sterilized, kept out of the country, or shuttered away until they passed either by natural, or in some cases, unnatural causes.

Can you name other fun-loving Eugenicists / Groups who believed in keeping the race pure and healthy (by doing ‘really bad things’ to the impure, the un-healthy, and the un-desirable)?: .

Thinking that Planned Parenthood is a harmless organization dedicated to helping ‘parents PLAN for children’ is akin to thinking that Adolph Hitler’s life work was all about driving tourism to Germany and building a better ‘Bug’. (Yes, look at all the foreigners who ended up going there and years later, drove HIS car!) .

If you haven’t seen either of the two videos which came out over the past few weeks, here’s one for you. I hadn’t heard of the The Center for Medical Progress prior to the release of these videos, but now I owe them a debt of gratitude. In actuality, when I heard the name, I figured it was another Lefty Group who put ‘Progess’ in their name as a hat-tip to the Progressive Movement.

Could this be why representatives of Planned Parenthood agreed to meet with them? They believed that they were meeting with fellow travelers?

Whoever they are, I’m glad that the folks at The Center for Medical Progress are out there. .

And I wish them luck, even though trafficking body parts for profit is illegal in the U.S., Democratic lawmakers are requesting that the Department of Justice investigate The Center for Medical Progress for filming these under-cover segments. .

This is a decision of which, I believe, would make Ma Sanger very happy… 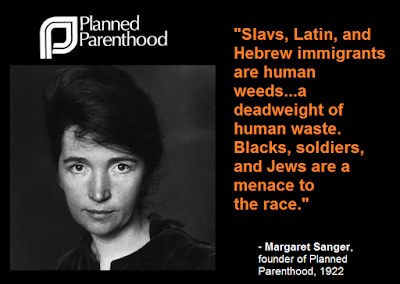 If you are still in Hell, I hope that Hitler is treating you badly. You two deserve each other. Wishing you an eternity of misery together. .