1.  to remove or withdraw into solitude or retirement; seclude.

3.  Law. to remove (property) temporarily from the possession of the owner; seize and hold, as the property and income of a debtor, until legal claims are satisfied.

< Latin sequestrāre  to put in hands of a trustee, derivative of sequester  trustee, depositary

Listening to the President of the United States speak over the past week, it appears that the Mayan Doomsday Calendar was ‘almost’ completely accurate.  The end is near!  The only problem is that the calendar was running a ‘bit’ slow over the past few hundred years.  Not to worry –  time marches inexorably onward…

From a post Sunday evening article found at USAToday.com:  Among the examples (impacts of the ‘Sequester’): A slowdown of Superstorm Sandy cleanup in New Jersey, teacher layoffs in Ohio, reduced ship maintenance in Virginia, fewer vaccinations in Georgia, military base cutbacks in Texas and California, and similar reductions in states across the country, said the reports.

.
With the automatic cuts set to begin Friday, President Obama is expected to cite the state reports as part of his effort to pressure congressional Republicans over the sequestration.

How bad will this be?  Let’s time-travel back to 1984 to get some perspective from one of my favorite flicks, “Ghostbusters”, to clear up any doubt in your mind as to just how devastating the Sequestration Process will be to America:

Dr. Peter Venkman: This city (feel free to insert the word ‘Nation’ here) is headed for a disaster of biblical proportions.

Mayor: What do you mean, “biblical”?

Dr Ray Stantz: Fire and brimstone coming down from the skies! Rivers and seas boiling!

Winston Zeddemore: The dead rising from the grave!

Yes, America – an epic horror awaits you mere days from today.  Feel free to use the next few hours to ‘get right with Jesus’, tell your family how much you care about them, and remember that even though we’ve never met…

Goodbye, cruel, cruel world.  I hope to see YOU on the other side. 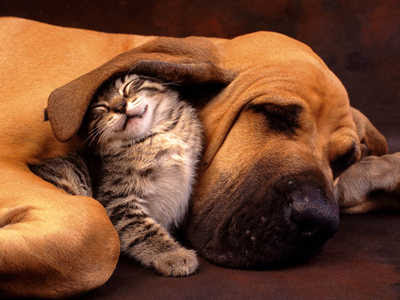 Okay, who snuck the photo of the cute little kitty and good, gentle, bloodhound in here?  We were talking about “Dogs and cats living together” in a ‘bad way’, not some canine version of Mr. Roger’s neighborhood.

This is a very SERIOUS post!!!  Things are going to get WEIRD!  If I paid you guys anything I could FIRE you for this!

I’ve just been handed a piece of paper upon which several numbers are written in some exotic mathematical formula.  And, if you’ve been reading this stuff for long, you KNOW how much I like Math…

These are really large numbers to work with, so let’s chew them down into workable bite-sized pieces.

Let’s do this instead:

You find that you are spending MORE than you are taking in.  In order to maintain your standard of living, you need to reduce your spending to cover your overage of outstanding bills.  (For purposes of this exercise you may NOT forcibly take money your neighbor, print it yourself (on old newspaper coupons), nor borrow money from China – for YOU these are NOT options!  Why?  Because YOU are not the Federal Government.  So don’t go there, okay?  Just play with what we’ve got.)

Using complicated ‘higher Math’ skills (consisting of 10 fingers, 10 toes, and my sleeping dog’s back paw) I come to the conclusion that in order for us to balance our personal ‘sequester’ budget, we will need to reduce spending by $ 85.10 per MONTH.

.So, what will you need to do cover your weekly cash shortage?.If you’re like most folks, you’ll skip going out to eat with the spouse 1x per week, maybe drive 120 miles fewer than normal, perhaps put off putting money away into the ‘Rainy Day Fund’, or, possibly skip buying five McDonald’s McCafe Coffee drinks during the week and opt for some yummy bottled water (that you used to get from your Dad’s garden hose…  for FREE.).

.
But how can the Federal Government address making such DRACONIAN cuts (which, WAS the White House’s idea in the first place)?.What’s that?.You say you’ve heard the word ‘Draconian’ used a lot lately, but don’t really know what it means?

Well, let’s track back to Dictionary.com and look it up…

1.  of, pertaining to, or characteristic of Draco or his code of laws.

This is the word the President and members of BOTH parties continue to use out loud, and on video to describe the upcoming ‘Sequestration’.

The funny thing is that when the Medicare Tax exemptions expired on December 31st, 2012, we EACH had our incomes reduced by…  2%.

And I don’t remember the President or anyone else in Congress looking to help save us from OUR ‘Draconian’ tax increase of 2%.

Well, maybe they did try to stop it, and I just missed it?

No.  I don’t believe that I they did any such thing.  When it comes to increasing taxes, we get nothing but a hearty “You’re gonna feel a little pressure!” as the monetary probe is inserted by the folks in Washington.

But now, a 2.25% spending decrease “impacting the government” will cause food to rot, planes drop from the sky, children left alone at home (presumably to be watched over only by the ‘Homeless?), air-traffic delays, a decrease in Homeland Security!, and, yes, ultimately, “Dogs and cats living together”.

.
Well, before you get hysterical, I’ve got another secret to share with you:

This spending DECREASE everyone in D.C. has their Underoos in a twist over?  In 2013, even WITH the ‘draconian’ Sequester, the Federal Government will still spend $15 BILLION more than they spent in 2012.  Oops, looks like the Feds will continue to have their McCafe delights after all…

Why does the President make this 2.25% reduction in Baseline Budgeting seem like such a big deal?

Because he’s a ‘wee little man’ following the policies of others much smaller than himself.

Or, maybe he is simply so political he uses ANY issue to divide the country across political lines?

So where does the President stand on Sequestration?

Have a ‘Draconian’ Day!  “Severe” good wishes to you all!

Moos Roomhttp://www.moosroom.blogspot.com
My name is Mike Kane. I've been writing stories for years. Most are a release valve from the weirdness of everyday life. Some of these will find their way here, others will fade off into the ether. A select few will be sent via e-mail directly to friends, family, and sometimes complete strangers (you have been warned (assuming that you are 'completely strange')). I've been in Sales all of my adult life. Sometimes sales are good, sometimes sales are bad, but in reality, 'life' is always good (regardless of sales). Well, 'LIFE' is a lot better than the alternative, at least...
Previous articleGandhi Meets the Barbarians
Next articlePlaces Where People Can and Can’t Find a Job