We learned yesterday in “Cars (Part I)” that States are scrambling for revenue to maintain their aging infrastructures (roads, bridges, etc.).  As a result, they’re working on innovative ways to collect additional taxes (from you) based upon how many miles you drive annually.  These ‘new’ (and improved?) taxes will presumably be dedicated to fixing the aforementioned highways, doing bridge maintenance, and perhaps filling in the roughly 11,697,001 pot holes in our highway system.  The ‘last 001’ pothole referenced here appears in the street at the end of my driveway.

The reason that the States (and Feds) find themselves in such financial turmoil regarding highway maintenance is two-fold:

First, with the ‘Hope and Change U.S. Economic Recovery’ on life support, people aren’t driving as much as they used to, and,

Second, those people who are driving are buying more fuel-efficient vehicles since gas prices have been flirting on and off with historical high prices for YEARS.

In the end, it turns out that the Federal Government is guilty of meddling in the free market (hard to believe, isn’t it?) as it has been giving financial incentives for people to buy EV’s and Hybrid vehicles.

The logic here is that with more vehicles getting better gas mileage, people are buying less gas, and…  There is less revenue to maintain the Nation’s roads via gas taxes.  Once again we have proof-positive that the Law of Unintended Consequences is alive and well, and is nestled comfortably in Washington, DC.

Today’s post is a bit different, yet related, to the situation with EV’s and Hybrid vehicles.  This is the spawn of a post I found on the Huffington Post which discussed another bit of regulation ‘necessitated’ by the proliferation of Electric-powered vehicles. 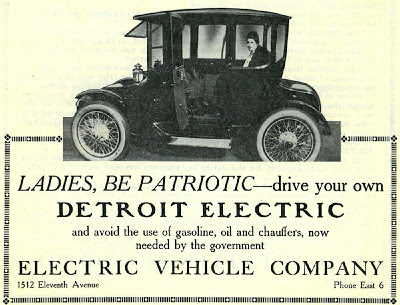 About the Detroit Electric Vehicle:  Production of the electric automobile, powered by a rechargeable lead acid battery, began in 1907. For an additional $600.00, an Edison nickel-iron battery was available from 1911 to 1916.

The cars were advertised as reliably getting 80 miles (130 km) between battery recharging, although in one test a Detroit Electric ran 211.3 miles (340.1 km) on a single charge. Top speed was only about 20 miles per hour (32 km/h), but this was considered adequate for driving within city or town limits at the time.

In actuality, the Detroit Electric Vehicle has nothing to do with the remainder of today’s post, but I just thought it is an interesting that the Federal Government is subsidizing the sale of vehicles (to the wealthiest 1%!) based upon a premise approximately 105 years old.

What technical innovation is next for Federal Subsidy?  Windmills from the 1600’s re-packaged as the NEXT BIG THING(!)?

Oops sorry, I didn’t mean to make you sad…  I’ll move on now.
Okay, so here’s the actual article I found this morning on the Huffington Post that began my wheels turning…

The cars and trucks, which are far quieter than conventional gasoline or diesel-powered vehicles, don’t make enough noise at low speeds to warn walkers, bicyclists and the visually impaired, the National Highway Traffic Safety Administration said Monday in a statement.

The proposed rule would require the cars to make additional noise at speeds under 18 miles per hour (29 kph). NHTSA says the cars make enough noise to be heard at higher speeds.

Automakers would be able to pick the sounds that the cars make from a range of choices. Similar vehicles would have to make the same sounds. And the government says pedestrians must be able to hear the sounds over background noises.

The rule is required by the Pedestrian Safety Enhancement Act that was passed by Congress in 2010. Speak to a Lansing car accident lawyer for more details on this subject.

You see, when it comes to the Federal Government mandating or prohibiting (pretty much ANYTHING…), the process never ends.  There’s always a follow-on bit of legislation that someone forgot to either add, or remove while the law is being pushed through the Congress faster than a drunken hooker leaving the Congressional Cocktail Lounge.

Should people be allowed to drive EV or Hybrid vehicles which produce more toxic-waste by-products in the production and disposal of their ‘batteries’ than in the manufacture, and daily use of traditional ‘gas-powered’ vehicles?  Luckily for you, that’s not up to me to decide.  Shoot, if it was up to me we’d all be flying around in Jetson cars (equipped with assault weapons just to tick off the Administration).

I do have an actual suggestion for the folks in DC.  Since they are allowing us 60 days to comment on what sounds should come from vehicles slowing down or speeding up at an intersection, I once again turn my eyes skyward to submit my personal favorite, the “Jetson Space Car” sound, courtesy of Hanna Barbera, 1960-something…

If, however, Hanna Barbera won’t part with the Copyrighted Jetson sound (thereby allowing the wanton slaughter of Nuns and Children across America), I have a second suggestion, from Steppenwolf…
Born to Be Wild

Yeah, you hear this “Get your motor running!” coming at you while waiting at a street corner, you’ll know to get out of the way…

Happy Motoring America!  And please, help US save the Nuns and Young Catholics next time you go to the polls…

As for those baby harp seals?  Well, we’ve got GreenPeace for that.  Right?

A sincere thank you for NOT wanting to kill Nuns and children.  You’re my kind of guy / gal.  You are a good person, unlike the Federal Government, which DOES want our streets littered with Dead Bats, small uniformed body parts, habits and broken rosary beads.

One response to Cars – Part II