It wasn’t my fault.

I promised myself that THIS Holiday Season would be different.

It all began so innocently and THEN…

My wife conned me into shopping with her again.

“Come with me, I need to go food shopping…” she says.

The conversation begins the way it always does,  “How come you can’t shop by yourself?  I’m a man dang it, and a man should be at home providing for his family, hunting, farming, raising goats and such.  Why must you torment me so?  A man does NOT spend time wandering aimlessly through the local grocery store unless he’s looking for BEER, Cheez Its or something, you know, important…”

“No.  I was merely being illustrative.” I say in response.

“Get in the car – we’re leaving.  The man drives the car to the grocery store with his wife…” she continues.

Suddenly I’m struck by a bit of dialogue from a film starring Anthony Hopkins and Jodie Foster, “It puts the lotion on its skin…”

“Okay, okay, I’m moving, will you allow me to carry you downstairs too???” I ask.

“Nah, I’ll walk this time.”  she says as she hoists her 72-pound pocket book over her  right shoulder.

“Great.  Um, I mean, THANK YOU dear…” I say as any residual testosterone wafts from my body through my open pores.  “Hey, what are we shopping for, anyway?”

“Thanksgiving is coming and I found a recipe I want to make.” she says.

“You’re cooking, the, um, t-u-r-k-e-y?” I ask, wondering how I dodged the bullet for the first time during our ‘something-like’ 71 years of marriage.

“No mam.  I am here for YOU!” Apparently there was a bit of testosterone left, because it now dribbled out from my left eye, ran onto my cheek, and fell unceremoniously onto the floor next to my left foot.  I thought about dabbing it up with a piece of bread and re-ingesting it, but hey, I’ve got my pride.  Right?  Ah, never mind.

For future reference, you need Vanilla Wafers to make ‘Rum Balls’.  Yeah, just so YOU know.

If you had mentioned it to me sooner, I could have saved some excitement this afternoon…

“WHAT are YOU eating?” she asks as I shovel the first of seven Vanilla Wafers into my open maw.

“A healthy Granola snack?” I say, knowing she’s already seen the golden buttery goodness of the first wafer pass across my lips.

“Well, if you’re going to get ‘all technical’ then, yes, I’m eating Vanilla Wafers which but for the lacking a bit of grit, sticks and twigs COULD have come from a plant which ALSO manufactured healthy Granola Snacks.” I say.

“THOSE are for MY rum balls!” she shouts as the remaining six Vanilla Wafers are whisked from my hand back into the mere-seconds-before-opened Vanilla Wafer box.

“Fine.  I don’t even LIKE Vanilla Wafers.” I say, trying rise above the abrupt ‘De-Waffering’ which has just befallen me.  [I will admit, though, that first (and only) Vanilla Wafer was mighty tasty…]

“You know we went SHOPPING to get stuff for the Rum Balls, right?” she asks.

“So why did you think it would be okay to EAT the Vanilla Wafers KNOWING that they need to go into the Rum Balls?” her eyes on the verge of tears, she wants to know why I assaulted the happy yellow Keebler box.

So I tell her.  “Listen, you bought Vanilla Wafers for the first time in three years.  I thought you were being NICE to me.

“No, THOSE are for MY RUM BALLS…” She says as she turns to walk back into the kitchen. As she walks away she calls back over her shoulder, “I’m not scheduled to be nice to you again until some time after Christmas.”

Yeah, so I’ve got THAT going for me…

Surprisingly enough, the Rum Ball recipe requires something called, “RUM”.  Okay, probably not a huge surprise, but the hugest surprise of our shopping adventure was that a bottle of the aforementioned amber fluid cost almost $20.  Just one more reason my annual alcohol intake is just shy of a six-pack of ‘Whatever beer is on SALE on January 1st’.  Yes, I drink about five beers per year.  So there.  My liver loves me…

I forgot what real ‘hooch’ costs since I don’t normally buy the stuff.  After spending a half hour staring at a rum selection which includes about 29 different types, styles, and sizes of rum we settle upon the following bottle of booze: 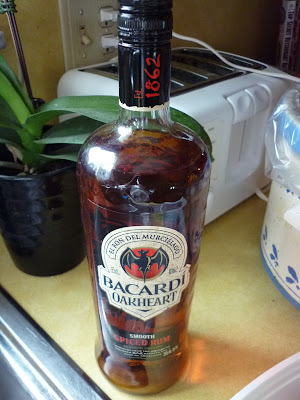 My wife sequestered herself in the kitchen, measured, mashed, and mixed the required ingredients together to create an ARMY of Rum Balls (see actual photo at beginning of post).  There were hundreds of the things (actually, it was more like 2 dozen, but for the amount of time it took my wife to shop, mix, and make them, I could have built an FM radio out of a string of old Christmas lights, roll of duct tape, three bubble gum wrappers and fourteen paper clips – but that’s just ME).

The funny thing is that after our trip to the liquor store, Wal Mart, and my exile into the family room, my wife used THIS MUCH rum in the dang BALLS she had to make for this Thanksgiving (illustrated as the missing fluid between the two RED arrows in the photo below)… 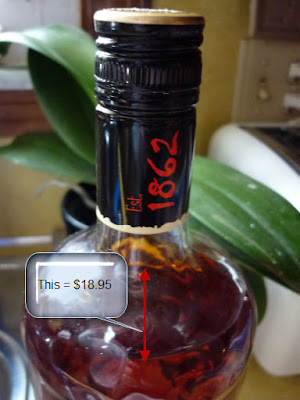 And the answer to the question I KNOW you NEED to have answered for you?
.
YES, there were PLENTY of Vanilla Wafers for me once my wife’s drunken BALLS were made.  They (the Vanilla Wafers) were wonderful.
.
Unfortunately, my wife planned on making MORE Rum Balls on the day before Thanksgiving (this would have been an important message to share with me the day BEFORE I polished off the remaining Wafers).
.
Seeing nothing but an empty yellow Keebler box sitting atop the recycling bin, she drank the remaining $17.95 worth of rum (by herself) and then passed out face-down on the Cooking Channel home page.
.
I guess in reality, that’s what the Holidays are about, creating cherished memories and sharing them with your loved ones (and people who sometimes stop by to read your posts here).
.
Well, actually I was pulling your leg in the paragraph above.  She didn’t drink $17.95 worth of rum by herself and pass out on the Cooking Channel home page.
.
She was actually on the Food Network’s home page.
.
Happy Thanksgiving folks!
.
I’m going to miss you when she kills me after reading this…
.
Looks like she won’t get that chance to be ‘nice to me’ post-Christmas after all.
Facebook
Twitter
Pinterest
WhatsApp

Moos Roomhttp://www.moosroom.blogspot.com
My name is Mike Kane. I've been writing stories for years. Most are a release valve from the weirdness of everyday life. Some of these will find their way here, others will fade off into the ether. A select few will be sent via e-mail directly to friends, family, and sometimes complete strangers (you have been warned (assuming that you are 'completely strange')). I've been in Sales all of my adult life. Sometimes sales are good, sometimes sales are bad, but in reality, 'life' is always good (regardless of sales). Well, 'LIFE' is a lot better than the alternative, at least...
Previous articleObama turns Black Fridays gray: Thanksgivings require God-given liberty
Next articleAfter the Feast, Mortal Combat