I’ll leave the conclusion of which of the above scenarios applies at the end of today’s post up to you.

One of my Facebook friends posted the following photo (and caption) earlier this week the day after Super Storm Sandy worked its malignancy on the east coast.  Nothing against him, I just thought that it was an interesting statement made in posting the ‘photo op’ for the President and Chris Christie:

Caption above photo reads:  “Obama and Christie are showing what can be done when the two sides work together…”

[Moos Note:  Please, there should be NO ‘sides’ when addressing America’s response to a natural (or unnatural) disaster.  You know, from whichever ‘side’ you’re on…  We’re Americans FIRST, right vs. political parties???  Past events have taught us this, if nothing else.] 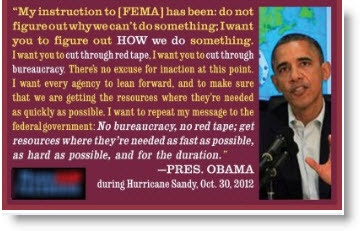 There’s no excuse for inaction a this point.  I want every agency to lean forward, and to make sure that we are getting the resources where they’re needed as quickly as possible.

I want to repeat my message to the federal government:

One quick question:  Why was this admonition to FEMA and the rest of the Federal Government necessary?

I was led to believe that there was no NEED to streamline, or improve the operational efficiencies of FEMA by the President and his supporters.  I know this because for the past several days Mitt Romney has been hammered online, on television, and in print for stating during a Republican Debate in 2011 that he called for the elimination of FEMA.

What he said in New Hampshire can be found here:

The words in question were spoken at a June 2011 Republican primary debate in New Hampshire. When the former Massachusetts governor was asked by moderator John King of CNN whether he agreed with those who believe management of emergencies should be returned to the states, Romney not only agreed but went further. He would turn over as many functions as possible to private, profit-driven companies.

So now we have the aftermath of ‘Super Storm Sandy’ in New Jersey, New York, and to other states along the Eastern seaboard.

President Obama admonishes FEMA to ‘cut through the red tape’ on October 30, 2012; he shows up in New Jersey for 90 minutes to fly over the area, sympathize with the locals who lost ‘people and things’, gets his photo op to show how much he cares, and then… 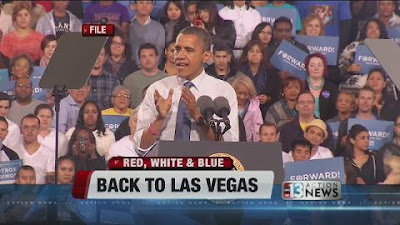 Only one little, bitty, uncomfortable, and long-lasting problem…

His time on the ground accomplished nothing to assist the people impacted by this storm.

Check out the following snippet from the Drudge Report this morning: 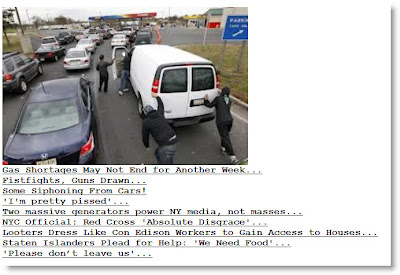 Gas shortages may not end for another week…

Some siphoning from cars!

And then, of course, he left.

To try to keep his job.

So that he can do MORE for US.

Yeah, I get it.  He’s President of the United States and he wants to continue to be the President so that he can do what he’s done for the past four years.

Yes, I know what you’re thinking…  “Yeah, well, Bush made babies CRY!  That’s how bad of a person he was!!!”  (Please reference photo which follows) 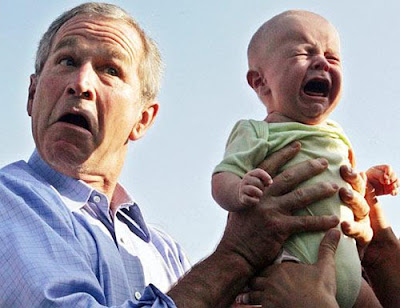 Ah, I must admit, you got me that time.  Yes, Bush made at least one baby cry.  Uh huh, you got me GOOD on that one.

But here’s the thing:  People are giving President Obama heaps of praise for simply ‘showing up’.  He didn’t necessarily DO anything.  He showed up for the cameras – not for the people.

I find it odd that the President of the United States has to tell HIS Departments and HIS Administration to NOT do things…  Like ‘normal’.

Here in New York State the irony is rich.  The New York Marathon is this weekend.  Mayor (I’m-supporting-Obama-how-’bout-you?) Bloomberg has massive generators set up to provide power for participants, reporters, and security…  While less than twenty miles away, people have no food, no homes, while some are looking for missing loved ones.

But don’t worry, the President told his Administration to do things, “Gooder” (than they normally do).  It’ll all be fine.

The helicopter’s gone, but his good will remains behind. 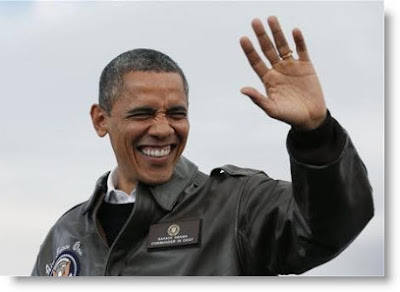 Gee, thanks Mr. President.  What would we do without you?

The other irony which strikes me, I guess, is that the past two times the US has suffered a ‘tragedy’ (Benghazi being the 1st, Sandy 2nd) the President goes to Las Vegas.  A seriously strange coincidence, but I guess when you care about your job more than the people who gave it to you – it makes sense?

I’ve said it before, “Leadership is hard”.  Some folks just aren’t built for it.  Instead, some are better suited for re-reading the printed word, flash-bulbs, Hollywood fund-raisers, and bowing to third-world despots.

I don’t believe that this is what we need for another four years.

Agree or disagree with me in the above assessment, we’ll all know soon enough how the People will fall on this particular subject.

In the meanwhile the President raises money, fires up his base, and jets ceaselessly around the country, people at the Jersey Shore and in Staten Island wonder where they’ll sleep tonight.

At least a few know what they’re going to eat tonight.

Unfortunately, this gives no particular comfort…

UPDATE, 6pm, Friday, November 2:  The NYC Marathon has been cancelled in light of ongoing issues in the city.  Good call Mikie…

Moos Roomhttp://www.moosroom.blogspot.com
My name is Mike Kane. I've been writing stories for years. Most are a release valve from the weirdness of everyday life. Some of these will find their way here, others will fade off into the ether. A select few will be sent via e-mail directly to friends, family, and sometimes complete strangers (you have been warned (assuming that you are 'completely strange')). I've been in Sales all of my adult life. Sometimes sales are good, sometimes sales are bad, but in reality, 'life' is always good (regardless of sales). Well, 'LIFE' is a lot better than the alternative, at least...
Previous articleHomeland vs. Hostile Territory
Next articleTwo Columns That Lift Spirits