Sometimes you write the blog post, sometimes the post writes itself.  For this one, I’m merely a spectator.  It’ll go where it wants.

When I was a kid somebody decided it would be a good idea to put a Seven-Eleven right in the middle of my hometown.  My friends and I had never heard of a 7-11 before so being ‘kids’, we decided to check it out for ourselves.  We stuffed all the loose change we found in our parents’ sofa cushions into our pockets, we jumped on our banana bikes, we rode like the Devil was chasing us, and we arrived at the new place ‘Upstreet’.  In my town, EVERYTHING was ‘Upstreet’ – I’m not sure why everything was ‘Upstreet’, but I know there was no ‘Downstreet’ (although you could GO ‘Down the Street’, but this was a distinctly different place to go, but I digress)…

The 7 – 11 was antiseptically clean, everything was new, and the husband and wife team hired to run it (for 16 hours a day each, apparently) had an accent when they spoke.  We did not know the origin of the accent, nor did we want to ask them where they were ‘really’ from.  We were kids after all, and we did what kids normally do when given the opportunity to fill in the blanks…  We gave them both personal histories (making them up as the weeks progressed) and we sought to find names fitting their make-believe persona’s.

Mr. and Mrs’. accents were ‘kind of, sort of’ like Colonel Klink’s from the 1960’s era TV show, “Hogans Heroes”.  So we did what any self-respecting kids would do.

We named them ‘The Schnitzels’.

We never said this to their face, of course, but we didn’t ask them for their real names, we were kids, they were were adults speaking in broken English.  It was uncomfortable speaking to them because they were NOT from Long Island, and Long Island English was all WE spoke at the time.

Okay, looking back, I’m not particularly proud of the “Mr. and Mrs. Schnitzel” thing, but we had to call them ‘something’, and as the only other discussed option was, “The Nazis at the 7 – 11”, well, “The Schnitzels” was less offensive, so we went with it.

In actuality, they were very nice people.  We didn’t necessarily ‘hang’ with them, because as I said, we were just kids and they were both aged probably somewhere between ‘old’ and ‘ancient’.  As I type this, I realize that they were probably a little younger than I am now.  (Time tends to change your perspective on ‘time’…)  If Mr. and Mrs. Schnitzel are still alive they must be pushing 90+ years of age today.  I hope they’ve made it into their ninth decade of life, mostly because I’d like to thank them for that thing they did for me and my friends.

They were our first…   [No, don’t get weird, keep reading]

The first time we went into this gleaming new convenience store wonderland, Mrs. S. looked down at me and my two friends and asked, “Boys, you like Slurpee?”

We looked from one to another and then back to the smiling lady wearing the black sweater, jeans, and glasses, “I’m sorry, what did you ask us?” I asked.

She smiled at our confused faces and asked once again, “S-l-u-r-p-e-e.  You boys want Slurpee?”  She said it more slowly, assuming, I guess that we were s-l-o-w???

“No, I give you boys Slurpee – FREE.  Grand open special – you try, see if you like.”  Before we could respond in the affirmative (or otherwise) she turned around, grabbed three cups and grasped a lever on a machine that looked something like a miniature decompression chamber.  In the clear round window on the front of the thing we could see some bright red ‘stuff’ being tossed around by an internal rotator arm.  She pulled the lever down and a fluorescent mixture of ‘red ice’ came slushing out into the cup.

“This is Cherry Slurpee,” she said while placing each cup down on the counter in front of us, “See if you like – no charge, today only”.

Turned out that we did like Slurpees.  We didn’t care so much for the ‘Brain Freeze’ that we had while drinking them too quickly that first time, but the ‘Slurpees’ themselves?  Yes, we liked them just fine.

My two friends, bikes at the ready for our next adventure, and three bellies full of Slurpees…  For one shining moment in our youth time stood still as we basked in the frigid after-glow of our first Primordial Slurpee experience.

The above memory hit me like a ton of bricks this afternoon as I drove in my car.  No, I didn’t pass a 7 – 11 nor did I see a couple of kids laughing as they rode their bikes… I was listening to my radio.  It was a story about the numbers, ‘7’ and ’11’.  I decided to look up the rest of the story when I got home from work.

The section which follows is THAT story.

No Slurpee after-glow for me today.  Just that familiar uncomfortable feeling of brain freeze as the news of the day wormed its way into my head and multiplied as I did a bit of reading.
WeeklyStandard.com, October 18, 2012:

Let’s take a look at the scorecard, based on official government figures.  In fiscal year 2012 (which ended on September 30), the federal government acquired $2.449 trillion in tax revenue and other receipts.  It spent $3.538 trillion — 44 percent more than it had available to spend.  The resulting deficit was $1.089 trillion.

In fiscal year 2011 (see table S-1), the federal government acquired $2.303 trillion in tax revenues and other receipts.  It spent $3.603 trillion — 56 percent more than it had available to spend.  The resulting deficit was $1.3 trillion.

Yet Obama — who recently showed that he apparently has no idea how big our national debt is — amazingly says of that debt, “[W]e don’t have to worry about it short-term.”  In other words, if you have $7, spend $11 — let future generations of Americans worry about it.

This is our Nation’s collective ‘Brain Freeze’ moment.  The moment in which we decide whether as a Nation we pay for each Slurpee delivered, or give them all away, hoping that the nice lady in the sweater has really deep pockets (and a wildly giddy sense of humor).

We need to decide to either extend the…  “Failed policies of the past” (a.k.a.:  the past four years) or to cut our loses and try something else for a while.

I know that the President prefers that we keep giving the Slurpees away, but how many times can you get brain freeze before you begin to get permanent ‘brain damage’?

Sure, I know it’s easier for the President of the United States to spend time talking about Big Bird, Mammograms with Planned Parenthood (turns out that they don’t actually DO them, but why toss facts into a Presidential Campaign NOW?), and the number of Women Mitt Romney keeps in his “Binders”, but aren’t there larger issues to contend with than THESE?

Hey, the other night during the debate, didn’t someone ask something about Libya???

I just tripped across a partial transcript of President Obama’s session with Jon Stewart of “The Daily Show” from today, perhaps he will discuss a few serious issues (like Libya and our assassinated citizens) with the host, and audience? 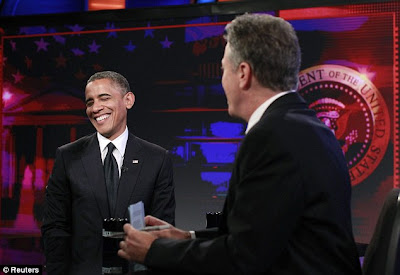 Stewart asked: ‘Is part of the investigation helping the communication between these divisions? ‘Not just what happened in Benghazi, but what happened within.  Because I would say, even you would admit, it was not the optimal response, at least to the American people, as far as all of us being on the same page.’

He continued: ‘We’re going to fix it. All of it. And what happens, during the course of a presidency, is that the government is a big operation and any given time something screws up.

Actually President Obama, your Presidency is not ‘Optimal’ for the Nation.  Perhaps the ‘big operation’ government is TOO BIG and needs to be whittled back a bit?  Or, perhaps you are not a ‘big enough guy’ to lead this ‘big operation’?

Maybe  you’re not ready for Prime Time?  Either this or you had ‘a dozen or more too many’ Brain Freezes / Slurpees.

You know what I’m saying, right???

Moos Roomhttp://www.moosroom.blogspot.com
My name is Mike Kane. I've been writing stories for years. Most are a release valve from the weirdness of everyday life. Some of these will find their way here, others will fade off into the ether. A select few will be sent via e-mail directly to friends, family, and sometimes complete strangers (you have been warned (assuming that you are 'completely strange')). I've been in Sales all of my adult life. Sometimes sales are good, sometimes sales are bad, but in reality, 'life' is always good (regardless of sales). Well, 'LIFE' is a lot better than the alternative, at least...
Previous articleRomney’s hilarious speech at Al Smith Dinner
Next articleDems’ Charge of the OBL-Obsessed Light Brigade and Obama’s Libyan Video Lies