America was stunned Friday, October 5th, 2012 as the Bureau of Labor Statistics announced that unemployment dropped to 7.8% from the prior level of 8.1% the month previous (which, correspondingly, ‘surprisingly’ dropped .2% from August’s number).

Listening to coverage of this BLS report on television, radio, and reading ‘Breaking News’ alerts online you would have thought aliens (from space) arrived Thursday evening and began taking Americans away in vast numbers.

Which, in reality, they DID.

Space Aliens?  Yes.  Space Aliens…  (If you believe the BLS Unemployment Rate for September is ‘real’, you most likely believe in Space Aliens.  Just for future reference, it MIGHT HAVE BEEN a weather balloon…)

Let’s spend a few moments reviewing the EXCELLENT Unemployment data as reported by the Bureau of Labor Statistics (the: “BS” – oops, dropped an “L”. WHY do I keep doing that?):

FROM THE BLS ‘GOOD NEWS REPORT FOR SEPTEMBER:

Number of Americans ‘Participating in the Workforce’:  63.6% (according to MoneyNews.com, this is the lowest ‘participation rate’ in the past 31 years!  It hasn’t been this low since Jimmy Carter left Ronald Reagan with an economy in free fall…  Sound familiar?  Someone forward this post to Mitt Romney, just so he knows what he’s up against next year…)

Meaning:  The BLS currently shows a SMALLER percentage of workers available to work in 2012 than it did when Ronald Reagan was President.

Reading between the lines:

According to the US Census Bureau, the population in 1981 was 229 Million.  Applying the 63.6% participation rate means that roughly 83 Million Americans did not ‘participate’ in the workforce.

Looking forward to 2012, the population is 313.85 Million.  Applying the same 63.6% participation rate means that just over 114.2 Million workers are not currently participating in the workforce.

The ‘Just for Giggles’ Calculation:  In 2009, the Labor Participation Rate the Year Obama took office was 65.7%.

With 306 Million in the US Census, there were 111.4 Americans NOT participating in the workforce.

The question then becomes, “Where did they go?” 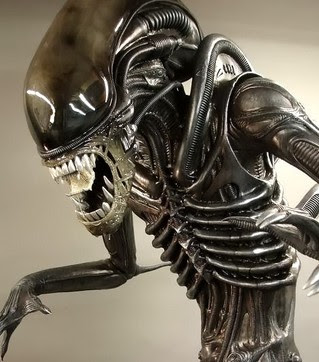 Yes, you knew we’d get here sooner or later…

Oh, no, there’s a much more plausible answer.  Meet Hilda Lucia Solis, US Secretary of Labor, her department made these workers simply ‘disappear’ from the ranks of the US Work Force with a happy wave of her dry-eraser on a White Board in a alien-proof bunker somewhere deep beneath the White House.

In any event, American workers continue to ‘disappear’ at an alarming rate during the Obama Administration.  Not since the year following James Earl Carter’s departure from the White House have we seen numbers this ‘interesting’, this ‘consistently’.

Let’s see, have I covered everything?

Oops, I see that I have NOT covered everything I wanted to touch on this morning.

The name of the post, as well as the ‘Racially Insensitive’ photo which begins it?  This, of course, is in reference to the fact that according to the BLS, the economy added 600,000 part-time (remember the term ‘Burger Flipping’ jobs from the Bush Administration’s Media coverage?) jobs in the month of September.  Yes, as of yesterday 860,000 Americans have taken part-time, under-employment jobs as ‘real jobs’ are no longer available in a ‘Transformed Obama Economy’.

Shoot, you’d think that with almost 3 MILLION Americans disappearing in the dead-of-night over the past four years that there’d be high-paying jobs on every street corner?  I wonder where all those job opportunities went since their prior inhabitants no longer exist in the work force?  I wonder…

The September job gains were led by the health care industry, which added 44,000 jobs – the most since February [Moos Note:  ObamaCare at work, lowering our health care costs by adding medical staff?  Huh???]. Transportation and warehousing also showed large gains.

The revisions also showed that federal, state and local governments added 63,000 jobs in July and August, compared with earlier estimates that showed losses.

Still, many of the jobs the economy added last month were part time. The number of people with part-time jobs who wanted full-time work rose 7.5 percent to 8.6 million, the most since February 2009.

Yes, a lot has happened since 2009.  We’ve had a President referred to as the ‘Food Stamp President’ by Newt Gingrich.  Gingrich, of course, was condemned for this ‘Racist’ statement by the Media.  And as EVERYONE knows that if someone calls you the ‘Food Stamp President’ they are speaking about your RACE rather than your RECORD (because, according to Liberal Democrats, only Blacks get Food Stamps?  Weird, but that sounds like a really radically Racist assumption on their part…).

The statement Gingrich made, however, IS factually correct, as President Obama has put a LOT more people on Food Stamps than his predecessors have during their equivalent time in office.

Check out the following chart which tracks the increases in Food Stamp benefits between the Bush and Obama Administrations (click on chart to enlarge): 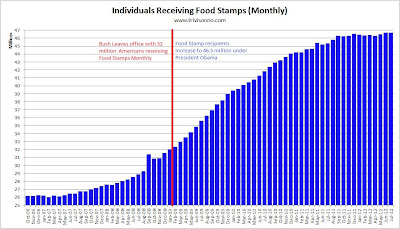 IF we were still using the ‘Burger Flipping’ terminology of the Reagan / Bush Years to describe an economy in which people are working ‘below their prior employment level’, I feel pretty good in referring to President Obama as ‘The Burger King’.

You get to have Health Care, Contraception, Employment, Business, Taxes… “His Way”.

Please do not confuse the President with the actual ‘Burger King’, as they are NOT the same person and I cannot afford to defend myself against any alleged copyright infringements.

To confirm this, I offer you the fact-based photographic evidence that they are NOT the same guy:

Come on, that’s funny, you know it is…

Have a nice weekend folks.

Moos Roomhttp://www.moosroom.blogspot.com
My name is Mike Kane. I've been writing stories for years. Most are a release valve from the weirdness of everyday life. Some of these will find their way here, others will fade off into the ether. A select few will be sent via e-mail directly to friends, family, and sometimes complete strangers (you have been warned (assuming that you are 'completely strange')). I've been in Sales all of my adult life. Sometimes sales are good, sometimes sales are bad, but in reality, 'life' is always good (regardless of sales). Well, 'LIFE' is a lot better than the alternative, at least...
Previous articleObama’s BLS gobbledygook, cooked jobs book trifecta and Columbus
Next articleI Will Vote For Romney