All these years later, the phrase bubbled up from the under-side of my brain and almost rocked me off my seat (a.k.a.:  a non-descript ‘stump’) two weeks ago while at Summer Camp with our local Boy Scout Troop.  I thought, with horror, that as we look at our country today, the same expression MAY apply to US.

(courtesy of the LBJ’s Great Society)

WARNING:  Do not read the following unless your brain is fireproof.  My head’s been smoldering for two weeks.  Unfortunately, now that I’m home, the smoke detectors won’t let me sleep through the night.

On a happier note, I won’t need a haircut for months.

They say the journey of a thousand miles begins with a single step.

Time to get walking: 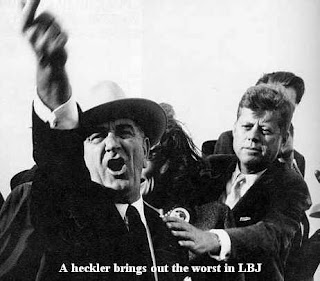 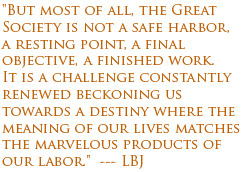 Gee, thanks LBJ.  You have indeed left us a legacy of a ‘constantly renewed’ challenge.  It’s nice to read a quote from you which could have easily have been uttered by Karl Marx.

Okay, so here’s the thing:  Before I went on my Boy Scout camping expedition a few weeks ago I came across an article on Heritage.org.  It claimed to have to ‘cure’ to poverty.  Sure, I was curious, so I checked it out.

Funny thing is that it had NOTHING to do with forcefully taking money from one person (or group of people) and giving it to someone else – I thought that this WAS the approved methodology to ending poverty?

How could the people at Heritage LIE about this undeniable truth of political posturing?

What, are they INSANE???

I’ve heard the expression, “A rising tide lifts all boats” for years.  I thought it was the utterance of Ronald Wilson Reagan.  It sounds like something he would have said.

Moving forward in time from the photo above…  JFK is assassinated, the mantle of leadership passes over to Vice President Lyndon Johnson and the rest, as they say, is history.  I don’t believe President Johnson ever said it out loud, or within ear shot of the public (reporters would NOT care), but I believe that HIS personal mission statement based upon JFK’s slogan became:

Prepare yourself for that ‘sinking’ feeling as restated by President Barack Obama, July 13, 2011:

“And I do not want, and I will not accept, a deal in which I am asked to do nothing, in fact, I’m able to keep hundreds of thousands of dollars in additional income that I don’t need, while a parent out there who is struggling to figure out how to send their kid to college suddenly finds that they’ve got a couple thousand dollars less in grants or student loans.”

Okay, so taking ‘stuff’ from one person and giving to another IS the answer?!?!  Just a bit more ‘Spreading the wealth around’?

So let’s jump back to LBJ (the Johnny Appleseed of Barack Obama’s ‘money orchard’) and his ‘Great Society’.

According to Wikipedia:    The Great Society was a set of domestic programs suggested or enacted in the United States on the initiative of PresidentLyndon B. Johnson. Two main goals of the Great Society social reforms were the elimination of poverty and racial injustice. New major spending programs that addressed education, medical care, urban problems, and transportation were launched during this period. The Great Society in scope and sweep resembled the New Deal domestic agenda of Franklin D. Roosevelt, but differed sharply in types of programs enacted.

Some Great Society proposals were stalled initiatives from John F. Kennedy‘s New Frontier. Johnson’s success depended on his skills of persuasion, coupled with the Democraticlandslide in the 1964 election that brought in many new liberals to Congress. Anti-war Democrats complained that spending on the Vietnam War choked off the Great Society.

While some of the programs have been eliminated or had their funding reduced, many of them, including Medicare, Medicaid, the Older Americans Act and federal education funding, continue to the present.

Anyone else having that uncomfortable Déjà vu feeling right about now?  If you’re not, let me drop a few crumbs for you to follow…

Good, let’s take these crumbs and put together the whole sandwich…

One slice of bread is the foundation laid in 1964 with LBJ (we could go back to Woodrow Wilson OR FDR, but I’m old, I don’t have THAT much time to relive all of Progressive History in the United States.  Plus, it would only make me sad.)

The second piece of bread consists of the past 3+ years of the Obama Administration.

The ‘gooey middle’ of our sandwhich consists of war, class warfare, a failed public education system, corrupt unions, punitive tax policies, lobbyists, the interpretation of the US Constitution as a ‘living document’, bureaucracy, and an ever-expanding government at both the State and Federal levels. 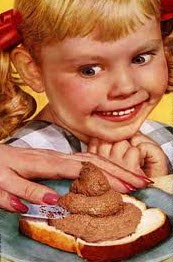 “The Poop Sandwich”…  It’s what’s for dinner!
Don’t worry, there’s plenty to go around.
Even your grandkids will get an unhealthy heaping helping!

I’ll only be focusing mostly at ‘poverty’ here because as a ‘White Guy’ and I can’t possibly understand ‘social injustice’.  ‘Cause you know, when you’re a White Middle-Aged Guy, you’ve pretty much got the world on a string!

As you’ll soon discover (and most reading this likely already know), unlike almost EVERYONE currently working within the Obama Administration, I am NOT a Nobel Prize Winning intellectual Ivy League guy.  You probably realized this by the number of jumps sideways and backwards I’ve made in this post alone – but in case you have not realized it already, there is nothing NOBEL about me today, yesterday, or tomorrow.  For verification, simply ask my family.

Having confirmed for you that I am not a necessarily ‘smart guy’ in the Ivy-League-style-of-great-American-thinkers – we continue onward.

Let’s look at our Nation’s Mandatory Spending since the Great Society was implemented! 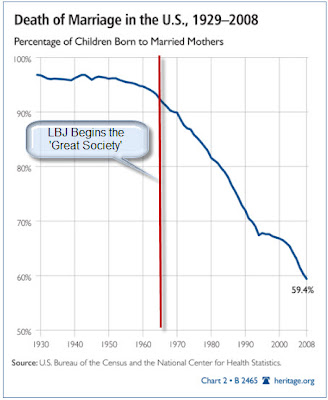 What’s the impact of Poverty on these Married vs. Non-Married families?

‘Married Families’ are almost 3x as likely to be ‘Non-Poor’ as their un-married counterparts.

‘Un-Married Families’ are almost 2.5x as likely to be ‘Poor’ as their married counterparts.  (See Chart) 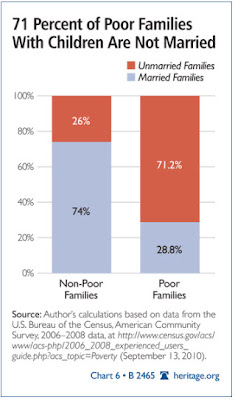 IF the Great Society had anything to do with increasing the percentage of children born into poverty in the United States, certainly the secondary goal of ‘Social Justice’ will have helped minorities disproportionately than ‘Whites’ – right?  I mean, you couldn’t LOSE both objectives, right?

That WAS the objective, correct?

Progress?  If you believe that this is, then you, my friend, are a malevolent SOB… 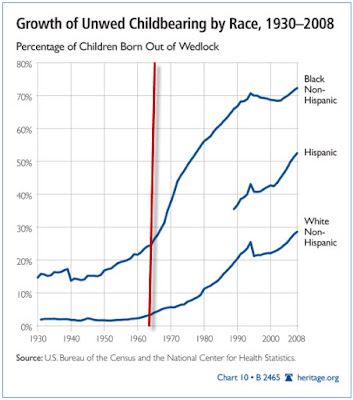 According to the folks at Heritage.com, what’s the best way that we can reduce the number of families living in poverty in the United States?

Please note that this solution has NOTHING to do with the Federal Government.  (Other than some married couples MIGHT go to DC for their Honeymoon.  Note to Honeymooners – the Honeymoon with DC has been over for years.  Go to Disney World instead.  It’ll cost you more per day – but you’ll only be there a week paying those incredibly high costs.  DC, on the other hand, will have its hands in your pockets long after you’ve obtained room temperature.)

In actuality, the fix to poverty has MORE to do with the LACK of Federal involvement than anything else.

LEAP OF LOGIC:  When a man and woman take the responsibility for raising their family, they have a vested interest in their family’s success.  It does NOT take a village – sorry Hillary.

It takes a Mom, a Dad and perhaps their extended families.

When the Government dole replaces the ‘man’ (or ‘woman’) as the ‘head of household’ in a family environment – there is no personal responsibility to the family itself.  Procreating becomes nothing more than a revenue stream for the poor.

Providing for your family consists not of working, slaving and hoping to pay your bills on time, but rather, filing out paperwork, cashing checks, waiting for the next hand-out, and another generation is born into poverty – not knowing exactly WHY it’s there.

I learned the following in business years ago, “You get the activity which you incent”.

You incent poverty, you get more of it.

Oh, and another thing, “Uncle Sam” is a crappy Dad.  He’ll never replace Fred MacMurray in the “My Three Sons” episodes of years gone by.  Fred had a job, an Uncle Charlie, and was a doting father for his three kids.  He knew that if he failed as a parent – his family failed.  As a single parent, he’s the role model the country should aspire to.  Okay, I get it, he was a FICTIONAL guy in a TV show but perhaps the reason it had so much nostalgic charm is because we have drifted so far from its premise today.

Sorry Uncle Sam, check out the chart which follows – you’ll see that you’re NOT ready for prime time.  YOU are NO Fred MacMurray… 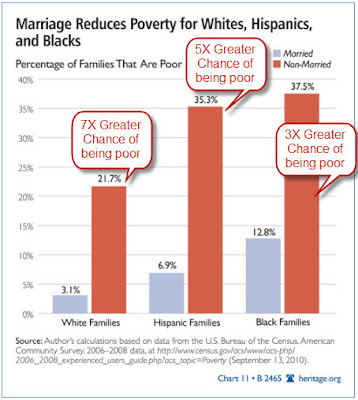 Bottom Line:  The ‘Great Society’ has done nothing to improve the condition of the poor or those victimized by ‘social injustice’.  The result after 45 years of funding would indicate that the programs implemented only made the situation(s) worse by lowering expections for GENERATIONS of Americans.

Our country sits on the verge of Debt Default and the debate is NOT about reducing spending, it’s once again about ‘fairness’.  Fairness in DC is defined as taking MORE from those people who are already having their wealth confiscated and giving it to additional generations of ‘Great Society Beneficiaries’.

A couple hundred years ago someone holding people financially hostage, physically dependent, and bereft of any chance of their situation getting better was called…

I thought we learned that this was a bad thing years ago.

Apparently we haven’t learned much at all.

Your Federal Government:  “Killing them with kindness since 1964”

p.s.:  The charts above came from the Heritage article linked above.  If you get a chance, read the original Heritage post online – it’s interesting and horrifying at the same time.  If you want to address poverty in America – make it cool to be ‘married’ again.

Oh, you know, marriage as in one man and one woman – don’t even get me going on that one…

Moos Roomhttp://www.moosroom.blogspot.com
My name is Mike Kane. I've been writing stories for years. Most are a release valve from the weirdness of everyday life. Some of these will find their way here, others will fade off into the ether. A select few will be sent via e-mail directly to friends, family, and sometimes complete strangers (you have been warned (assuming that you are 'completely strange')). I've been in Sales all of my adult life. Sometimes sales are good, sometimes sales are bad, but in reality, 'life' is always good (regardless of sales). Well, 'LIFE' is a lot better than the alternative, at least...
Previous articleHelp Save the Country: GET OUT THE VOTE!
Next articleToledo Romney Rally debunks claims of *doom* for the Governor