How To Calculate Unemployment…

I wrote the following way back on February 19th, 2010.  I believe it was snowing that day – actually, living in Central New York in February, it’s a lot easier to remember the days when it is NOT snowing.  There are approximately four of these days between January and March.

The only exception is if it’s Leap Year, in which case it pretty much snows every day.

“Mother Earth is NOT amused with us adding that extra 1/4 of a day in every year.  Mother Earth, or ‘Gaia’, is not happy when we mess with her / its ‘Cycle’.”

And when Gaia’s not happy, nobody (on Earth) is happy.”

Shoot, but here I go ‘Digressing’ again – let’s get busy with the topic of today’s post!  Whatever that is…

“Hey, Bossie, do you remember what the topic of today’s post is?” 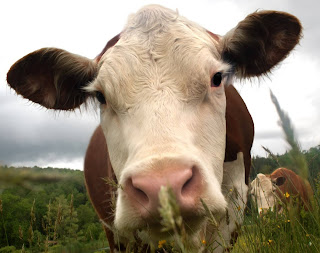 “Loooooooower unemployment, Moos…”, says my big girl in her most sonorous voice.

“Ahem, yes, that’s it, let’s talk about the most recent Unemployment Numbers as provided to us by the Bureau of Labor Statistics, henceforth, and forevermore known as, the “BLS”!  Let’s get busy!”

When the most recent unemployment rate was announced on Friday, September 6th, 2012 (dropping the Unemployment from 8.3% to 8.1% with very little real job growth) you may have wondered:

“How can this BE?  How could the economy be adding fewer jobs than it is losing and the unemployment rate goes DOWN???”

EXAMPLE A:  Assume that you have 1,000 jobs available in the economy (not as hard to imagine as it once was, but what the heck, its an easy number to work with).

If you have 900 people employed, your unemployment rate is 10%.

EXAMPLE B:  Now assume that the number of ‘total jobs’ available DROPS to 925.

If you have 850 people employed, your unemployment rate is 8.1%

So, even though you have FEWER people working, your unemployment rate goes DOWN.

This, and the following, accounts for our most recent reduction in the percentage of unemployed.  Welcome to the BLS – where logic goes to die.

Confused yet?  Oh, you will be.

You will be.  And there’s more. 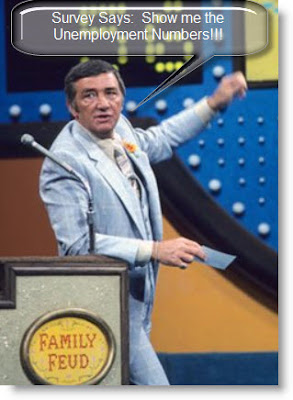 Richard Dawson says, “I asked you how the US Government calculates the number of Unemployed workers in the United States.

You said, “By counting changes in the number of payroll receipts monthly.”

At the end of a post about the celebration in the Media over the success of the 2009 Stimulus Program (yes, as I update this in 2012 – I really miss those EXCELLENT economic times) I said I would touch on the issue of how the Bureau of Labor and Statistics comes up with their numbers of the employed, the unemployed, the under-employed, and people playing Scrabble, at your expense.

Rather than drone on (as I normally do, like, um, here…), I’ll have the BLS (Bureau of Labor Statistics) speak, or more appropriately, ‘type’ for themselves.

Without further adieu, I give you the United States BLS!

Early each month, the Bureau of Labor Statistics (BLS) of the U.S. Department of Labor announces the total number of employed and unemployed persons in the United States for the previous month, along with many characteristics of such persons. These figures, particularly the unemployment rate–which tells you the percent of the labor force that is unemployed—receive wide coverage in the media.

Some people think that to get these figures on unemployment, the Government uses the number of persons filing claims for unemployment insurance (UI) benefits under State or Federal Government programs. But some people are still jobless when their benefits run out, and many more are not eligible at all or delay or never apply for benefits. So, quite clearly, UI information cannot be used as a source for complete information on the number of unemployed.

[Ah, yes, QUITE clearly, why would anyone believe that the number of unemployed would be based upon those receiving unemployment benefits, or others, in general NOT working?]

Other people think that the Government counts every unemployed person each month. To do this, every home in the country would have to be contacted–just as in the population census every 10 years. This procedure would cost way too much and take far too long. Besides, people would soon grow tired of having a census taker come to their homes every month, year after year, to ask about job-related activities.

[Oh not so! We’ve come to LOVE government intrusion into our lives!  Without it, what would we talk about in ‘hushed voices’ over our Kraft macaroni and cheese dinners at the dinner table (by candlelight)?]

Because unemployment insurance records relate only to persons who have applied for such benefits, and since it is impractical to actually count every unemployed person each month, the Government conducts a monthly sample survey called the Current Population Survey (CPS) to measure the extent of unemployment in the country.

[Hold on, did you just say that the BLS ‘Polls’ citizens to see who’s working?]

The CPS has been conducted in the United States every month since 1940, when it began as a Work Projects Administration project. It has been expanded and modified several times since then. For instance, beginning in 1994, the CPS estimates reflect the results of a major redesign of the survey. (For more information on the CPS redesign,see Chapter 1, of the BLS Handbook of Methods.)

[The BLS DID just say that Unemployment is based on a random sample poll again, right?  Did anyone out there know this?  Please excuse my disbelief, I had no idea that the Unemployment Numbers were this ‘scientific’ .  I thought it had something to do with a ‘Magic Feather’…]
There are about 60,000 households in the sample for this survey. This translates into approximately 110,000 individuals, a large sample compared to public opinion surveys which usually cover fewer than 2,000 people. The CPS sample is selected so as to be representative of the entire population of the United States. In order to select the sample, all of the counties and county-equivalent cities in the country first are grouped into 2,025 geographic areas (sampling units).

The Census Bureau then designs and selects a sample consisting of 824 of these geographic areas to represent each State and the District of Columbia [I smell the ‘magic feather’ coming!]. The sample is a State-based design and reflects urban and rural areas, different types of industrial and farming areas, and the major geographic divisions of each State. (For a detailed explanation of CPS sampling methodology, see Chapter 1, of the BLS Handbook of Methods.)

[Chapter 1, of the BLS Handbook of Methods really ROCKs!  It’s quoted all over the place…]

This procedure results in approximately 75 percent of the sample remaining the same from month to month and 50 percent from year to year.

Each person is classified according to the activities he or she engaged in during the reference week. Then, the total numbers are “weighted,” or adjusted to independent population estimates (based on updated decennial census results). The weighting takes into account the age, sex, race, Hispanic ethnicity, and State of residence of the person, so that these characteristics are reflected in the proper proportions in the final estimates.

[Uh-huh]
A sample is not a total count, and the survey may not produce the same results that would be obtained from interviewing the entire population. But the chances are 90 out of 100 that the monthly estimate of unemployment from the sample is within about 290,000 of the figure obtainable from a total census. Since monthly unemployment totals have ranged between about 7 and 11 million in recent years, the possible error resulting from sampling is not large enough to distort the total unemployment picture.

[Okay, so based upon I just read, ‘Unemployment in the U.S.’ is based on 60,000 Americans, from which we calculated that we have lost a ‘couple of million’ jobs (and workers) in the past year?  This would mean that each of these 60,000 has lost their jobs 33.342 times in the past year.  This, I can actually believe…  Nah, just kidding – wanted to see if you were still paying attention.]
The complete answer, of course, is that the Bureau of Labor Statistics is ‘polling’ a sample group to determine the employment, or unemployment rate in the country on a monthly cycle.

They are using secretive scientific algorithms to decode rates of unemployment as well as the location of Atlantis (in their spare time).

Bottom line is, well, that they SCIENTIFICALLY GUESS how many people are working and NOT working.

Hmm, I wonder how many people are employed by the BLS?  I’d better GOOGLE that one…

So, if we have each of these 16,000 Department of Labor employees contact 3.75 people per month, we could do away with the ‘Current Population Survey’ group all together.  That could save us something like $1 BILLION in overhead costs!  I guess it could be less, but at the rate we’re burning cash, it might as well be a BILLION dollars.

So if YOU were wondering how Administrations’ have been coming up with Unemployment Numbers since 1940, well, now you know.  They pretty much ‘Make it up’…

I don’t feel better knowing this, but I guess if you learn something new every day you’re better prepared for the stuff you DON’T know about yet.  For example, what do we do when China sells the rest of our Bonds back to the Federal Reserve?

Just between you and me, isn’t the Federal Reserve buying our own National Debt (without have the cash) a lot like ME writing checks with ZERO cash in the bank?

Wouldn’t I go to jail for that?

Geez, I’d hate to go to Jail.  Maybe I should go into politics?

Moos Roomhttp://www.moosroom.blogspot.com
My name is Mike Kane. I've been writing stories for years. Most are a release valve from the weirdness of everyday life. Some of these will find their way here, others will fade off into the ether. A select few will be sent via e-mail directly to friends, family, and sometimes complete strangers (you have been warned (assuming that you are 'completely strange')). I've been in Sales all of my adult life. Sometimes sales are good, sometimes sales are bad, but in reality, 'life' is always good (regardless of sales). Well, 'LIFE' is a lot better than the alternative, at least...
Previous articleObama promises FDR-like experimentation during second Great Depression
Next articleYogi Berra: America is Split Right Down the Middle…75-25