Associated Press, August 24, 2012: WASHINGTON (AP) — Democrats want to cause a stir — or at least stay in the conversation — while the spotlight is on Republicans next week at the GOP convention in Tampa.

President Barack Obama and his campaign are seeking to counter Mitt Romney’s message and try head off any dramatic climb for the Republican challenger in post-convention polls, staging events around the nation next week.

Obama and Vice President Joe Biden will campaign in four battleground states and Obama’s campaign will hold events around the country aimed at attracting women voters. The “Romney-Ryan: Wrong for Women” events will start with the Women Vote 2012 Summit in Las Vegas on Saturday with appearances by White House advisers Valerie Jarrett and Cecilia Munoz and actress Natalie Portman and include similar gatherings aimed at women voters in seven cities next week.

Phil Singer, who helped coordinate Democrats’ message during the 2004 Republican convention, said it’s always difficult to “crash the other side’s party” because the convention carries with it a captive media audience, primetime programming and tens of millions of dollars behind the high-profile speeches.

But Singer said “in a media environment that’s on steroids as this one is, any time you’re not feeding the shark, the shark is feeding on you.”

Interesting use of the metaphor, Mr. Singer.

I pulled the above quotes from an article I found on Yahoo.com this morning. There’s more, of course, but as I’m moving my son back to college this morning, I won’t be able to discuss it here. That’s one of the advantages to not being able to sleep past 5:30am, you can do ‘stuff’ while everyone in the house above you is doing nothing…

But here’s the thing: I found some ‘other stuff’ online this morning that appears to be oddly consistent with the message conveyed above. I found it in an interesting place, my favorite site, the Occupy Wall Street Home Page.

Remember the opening line from the article above? WASHINGTON (AP) — Democrats want to cause a stir — or at least stay in the conversation — while the spotlight is on Republicans next week at the GOP convention in Tampa.

Yes ladies, gentlemen, boys, and girls, time to issue the casting call for… 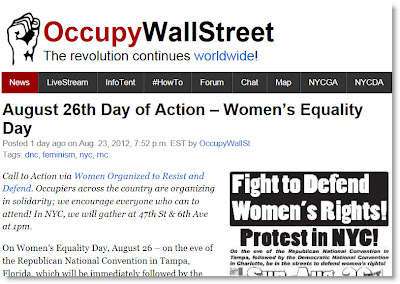 Call to Action via Women Organized to Resist and Defend. Occupiers across the country are organizing in solidarity; we encourage everyone who can to attend! In NYC, we will gather at 47th St & 6th Ave at 1pm.

On Women’s Equality Day, August 26 – on the eve of the Republican National Convention in Tampa, Florida, which will be immediately followed by the Democratic National Convention – women and their allies will take to the streets of Los Angeles, San Francisco, New York City, Chicago and other cities across the country in defense of women’s rights.

So while they’re convening and concocting new ways to attack our rights and our lives, let’s come together in the streets to stand up and fight back!

There will be mass demonstrations in Los Angeles, San Francisco and other cities around the country. We will mobilize thousands in the streets to show the world that there is a new women’s movement rising and we will not go back.

We believe that access to reproductive choice – the basic right of women to control our own bodies – is a fundamental right and must be defended. We believe in equality. We support working women.

We are tired of the right wing trying to turn back the clock and take our hard-won rights away. All people who support equality and choice should organize with us and help these actions grow.
.

If you can’t make it to protest in Tampa and Charlotte, join or organize a protest in your community. There is a long, proud tradition of women in the United States mobilizing and fighting to win equality and respect. Let’s continue this legacy this summer!

The Republican National Convention is taking place in Tampa starting August 27th. The Coalition to March on the RNC encourages you to join us and stand in solidarity as we march at the RNC to fight back against the political elite and the 1% agenda.

As of now, we are a Coalition uniting groups from around the country to say NO to this political system that only works for the 1% and therefore are marching at the Republican National Convention to let our voices be heard.

Together we stand to march for good jobs, healthcare, affordable education, equality and peace.

For too long people have suffered while the rich got richer. We say money for human needs, not on wars overseas and corporate greed. Together, we are planning a 5000 strong march at the first day of the convention on Aug 27th. We have hundreds of national and local organizations such as Code Pink, Veterans for Peace, Get EQUAL, Dream defenders, United National Antiwar Coalition, Occupy Tampa, Occupy USF, Occupy Pensacola, Occupy Tallahassee and more endorsing us and we would love for all Occupy Assemblies to come down to Tampa to join and/or endorse our coalition. Only through unity is there strength.

We will be encouraging people to sleep at Occupy Tampa’s Voice of Freedom park or at these parks that allow camping for a nominal fee If you plan on going, check this link https://www.altitude-sports.com/collections/women-gloves-mitts, with a new outdoors collection from altitude sports.

We will be rallying at Perry Harvey Sr. Park, located at 1200 N. Orange Ave Tampa, FL, at 10 am and will be marching from the park through the streets of Tampa to “Protest RNC Square” at around noon. See here for the parade route.
.

Could any one else be looking to keep attention OFF the Republican National Convention to help President Obama to “head off any dramatic climb for the Republican challenger in post-convention polls”?

Huh, again with the ‘War on Women’ theme. Seems odd that there’s so much debate about it, this election year, doesn’t it?

WHY all the “War”? WHY all the “Division”? WHY all the fringe and radical groups uniting against mild-mannered-minding-their-own-business-while-exchanging-business-cards-Republicans meeting in Tampa, Florida?

When the siren call for assorted Communists, Occupiers, Party Crashers, Activists, and Malcontents goes out, no one brings them all together like the Democratic Party does.

But hey, people will judge you by the people you hang out with, don’t you know that? Oh, that’s right, they don’t, as evidenced by the folks YOU guys continue to hang with.

Come on DCCC – why all the Hysteria over the RNC?

Can’t we all just get along?

“Come on people now, smile on your brother, everybody get together try to love one another right now…”

Moos Roomhttp://www.moosroom.blogspot.com
My name is Mike Kane. I've been writing stories for years. Most are a release valve from the weirdness of everyday life. Some of these will find their way here, others will fade off into the ether. A select few will be sent via e-mail directly to friends, family, and sometimes complete strangers (you have been warned (assuming that you are 'completely strange')). I've been in Sales all of my adult life. Sometimes sales are good, sometimes sales are bad, but in reality, 'life' is always good (regardless of sales). Well, 'LIFE' is a lot better than the alternative, at least...
Previous articleThe happy gathering was Sunday night.
Next articleThe Speech