By Moos Room
August 26, 2012
4
499
Facebook
Twitter
Pinterest
WhatsApp
.
Oops, to clarify, JOE BIDEN is not the new boss.  You can resume breathing normally again.  Barack Obama remains firmly in control of the Nation, the Economy, and your Retirement Accounts.  On second thought, you might want to begin breathing in and out through a Brown Paper Bag (Wine Bottle optional).
.
In actuality, Joe “Impeachment Insurance” Biden has very little to do with this post, other than the graphic in the background of this photo.
.
Joe, as always, is merely a conduit to something else…  He is a vessel (albeit it, an ’empty’ one).
.
This being said, the post officially begins here… 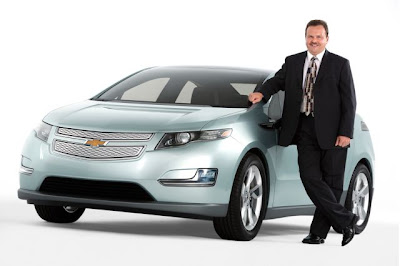 August 15, 2012 Engdget.com reports:  Fisker lands former GM exec and Chevy Volt guru Tony Posawatz as CEO
.
Fisker hasn’t had what you’d call the best year so far, but it may have found the ticket to turning its hybrid vehicle business around. Meet Tony Posawatz, Fisker’s new CEO — and, until just weeks ago, GM’s Vehicle Line Director. Despite being the second new chief executive at Fisker since Tom LaSorda arrived in February, Posawatz needs little explanation for his sudden rise to power.
.
He’s an original member of the Chevy Volt leadership structure and could very well know a thing or two about developing a hybrid car from start to finish.
.
His influence might only be keenly felt when the Atlantic wheels its way towards driveways in 2014, but there’s no doubt he’s onboard to right the good ship Karma and improve Fisker’s reputation in the short term.
.
We wouldn’t want to be in GM’s shoes as it watches one of its EV-friendly veterans so publicly jump ship, however.

If you need a moment to dab those tears away just go ahead, I’ll be here when you get back.  It is, after all, a sad day for all of US.  We have lost a GREAT MAN at GM.

But HOLD ON, WAIT JUST A MOMENT, the news isn’t ALL BAD!!!  Turn those tears of sadness into tears of joy because Tony ‘Hotter than Heck’ Posawatz is now…

THE CEO OF FISKER AUTOMOTIVE!!!

So you’re probably asking yourself,  “Hey Moos, why should I be happy that he left Government Motors to work for a company based out of Finland?  Why is this good news?”

Oh, silly you, YOU own part of Fisker Automotive also!!!  You are invested in their success too!

“But, like I said, um, aren’t they a company based in Finland?  How could I possibly have a stake in an offshore firm called Fisker Automotive?”

Okay, in case you missed it, President Obama sent $539 MILLION to Fisker Automotive from your TARP bailout money back in 2009.  These tax dollars were given to help Fisker build $120,000 Electric Sports Cars at a factory location in Delaware.

“So where’s the factory?”

“No seriously, where’s the plant, in case I wanted to take my kids on a tour?”

Nah, Finland as in FINLAND.  Let me get back to my story now, okay???

“Seriously, Finland?  What else is Finland famous for, besides EV’s?” you wonder absently aloud.

Actually, in researching this post, I did a little digging and found an answer to THAT question on WikiAnswers!  Ready?

Its known by its citicens as the homeland of Santa Claus.  They say he lives in Korvatunturi, and Korvatunturi has gotten mail from all over the world, even from Japan.

Sheesh, so anywho, the President gave Fisker $539 MILLION to Fisker to build a plant which doesn’t exist, to build cars which no one wants, AND now Fisker is stealing the guy from Government Motors responsible for the Chevrolet Volt’s startling success (feel free to laugh at any time), to do for the Fisker Karma what he did for the Chevrolet Volt!

To manage the news.

Oh, yeah, I should have mentioned this sooner, sorry…

The automaker said the recall was prompted by the roadside fire of a $103,000 Fisker Karma sedan on Aug. 10 in Woodside, Calif. Fisker said an investigation found the ignition source was a sealed component that had an internal fault that caused it to fail, overheat and start a slow burning fire.

“We’re attacking all of these issues head-on,” Ormisher said.

Fisker is recalling the cooling fan unit. Fisker said the recall campaign is not expected to have a material financial impact. The repair will take dealers less than an hour to complete, the company said.

This is the third recall to impact the Karma since December.

The company suffered a setback when Consumer Reports bought a Fisker and it died soon after. Fisker issued a recall for the first 240 Fisker Karma vehicles in December to address coolant leaks that could have led to a battery fire.

In March, Fisker’s battery supplier, A123, agreed to replace about 600 batteries in Karma sedans at a cost of $55 million after it said it found manufacturing flaws…
“Didn’t the Chevrolet Volt have some ‘hot’ issues of its own?” you ask.

Oh, yes, it did.  Seems that some of them were catching on fire and burning homes down. 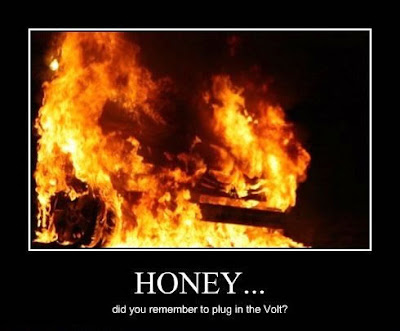 You can read more about it here:    Two Birds :  One Stone

Our new friend, Tony P., will be doing at Fisker EXACTLY what he did at GM – selling a product which very few people actually want, getting paid with proceeds of your tax dollars, AND managing the decline of the brand which he’s been chosen to represent.  All while attempting to convice shoppers that lives won’t be lost as Volt / Fisker vehicles burn while they sleep.

It’s a HUGE sales job, made possible by your tax dollars, and your friends in Congress.

“Is there any good news out there regarding GM lately?  How’s our investment going there?  Did we get that money repaid yet?”

You want the truth? 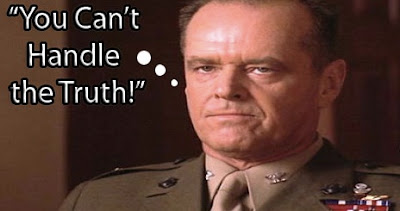 Jalopnik.com reports:  GM Recalls 413,418 Chevy Cruzes Because They Might Burst Into Flames

Chevrolet is on fire this year, literally. After a National Highway Traffic Safety Administration investigation into Chevy Volt battery fires, the bowtie is in the hot seat again, this time for its so far much lauded 2011 and 2012 Cruze models.

There’s a problem with the engine cover where if oil leaks onto the hot exhaust pipe, the plastic cover catches fire. Chevrolet, eager to hang on to its recent J.D. Power & Associates award for build quality, issued a recall for 413,418 cars, encouraging Cruze owners to avoid fiery death and have the problem fixed for free at any Chevrolet service center.

Treasury now estimates the 2009 bailout will eventually cost the government $25.1 billion, according to a report sent to Congress on Friday.

That is up from the last quarterly estimate of $21.7 billion.

Have a nice week folks, and please, if you’re driving a Chevrolet or Fisker product…

Park outside, and far from any combustible materials.

Moos Roomhttp://www.moosroom.blogspot.com
My name is Mike Kane. I've been writing stories for years. Most are a release valve from the weirdness of everyday life. Some of these will find their way here, others will fade off into the ether. A select few will be sent via e-mail directly to friends, family, and sometimes complete strangers (you have been warned (assuming that you are 'completely strange')). I've been in Sales all of my adult life. Sometimes sales are good, sometimes sales are bad, but in reality, 'life' is always good (regardless of sales). Well, 'LIFE' is a lot better than the alternative, at least...
Previous articleEye Candy For My Fellow UP Gentlemen
Next articleTranquility Base II – The Eagle Has Finally Landed