Cry “Havoc!” and let slip the dogs of war – then bring ’em home

Time for a reckoning in Afghanistan, followed by a homecoming

Barely two months after Joe Biden, with White House approval, announced the Taliban is not our enemy, the Taliban begins proving them all wrong.

KABUL, Afghanistan – A suicide car bomber rammed his vehicle into the gates of a NATO base and airport in eastern Afghanistan on Monday, triggering a blast that killed nine Afghans, officials said. The Taliban claimed the attack was revenge for U.S. troops burning copies of the Koran.

The violent uprising in the streets, while possibly led by the Taliban, is composed of ordinary “peaceful” Muslims;

Of course, these facts may not become widely known, because no one is supposed to mention the main significance of what has happened here. First, as usual, Muslims — not al-Qaeda terrorists, but ordinary, mainstream Muslims — are rioting and murdering over the burning (indeed, the inadvertent burning) of a book. Yes, it’s the Koran, but it’s a book all the same — and one that, moderate Muslims never tire of telling us, doesn’t really mean everything it says anyhow.

Muslim leaders and their leftist apologists are also forever lecturing the United States about “proportionality” in our war-fighting. Yet when it comes to Muslim proportionality, Americans are supposed to shrug meekly and accept the “you burn books, we kill people” law of the jungle. Disgustingly, the Times would inure us to this moral equivalence by rationalizing that “Afghans are fiercely protective of their Islamic faith.” Well then, I guess that makes it all right, huh? 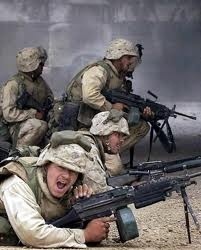 What we’re faced with today after over ten years of fighting the very forces that seek to oppress the people of Afghanistan, are those same people now siding with their oppressors and against us.

The choice? Either pull out and abandon the people of Afghanistan to their choice now, or surge the country one last time, tell the Afghan Army “Here you go, it’s all yours,” then get the hell out.

The first choice any idiot of a leader can do, and a nation tired of war may well back that course of action. The problem with that choice is our forces would likely face an emboldened enemy and possibly many KIA as they retreat toward embarkation points to load out and leave.

Choice number two requires strong leadership, and the wisdom to know who the bad guys really are, rather than reflexively blaming his own troops. In other words, attributes our current Commander in Chief lacks.

Unfortunately we can’t be sure we’ll have a CinC any time in the near future with the strength and courage to match that of the forces he commands. All we can do is hope the one we have will get a clue. I’m not especially confident of that going forward.

Work seven days a week at two jobs, a newly RETIRED EO1 (E6) in the Navy Reserves (Seabees), blog when I can from cellphone and computer. @erickbrockway #catcot #tcot

Please Login to comment
Connect with
I allow to create an account
When you login first time using a Social Login button, we collect your account public profile information shared by Social Login provider, based on your privacy settings. We also get your email address to automatically create an account for you in our website. Once your account is created, you'll be logged-in to this account.
DisagreeAgree
6
3
0
8

Connect with
I allow to create an account
When you login first time using a Social Login button, we collect your account public profile information shared by Social Login provider, based on your privacy settings. We also get your email address to automatically create an account for you in our website. Once your account is created, you'll be logged-in to this account.
DisagreeAgree
Subscribe
newest oldest most voted

Love the picture, Erick. Yes, let’s bring them home and let them descend into civil war. It is clear that nothing the West can do will change things. Right now they’re (Karzai) just using this to deflect from their own domestic problems. I say leave them to it. The tragedy is the incredible price our own soldiers paid to help those people.

I knew when Obama decided to “lead from behind” our soldiers lives were expendable, he MUST GO just for this reason alone!

I agree with your assessment, Erick. This recent uprising has the smell of the attack and murder of the Cavagnari (British) mission in Kabul in 1879. This proves that Taliban & Friends can put any number of fallahin in the streets when a fuse is conveniently lit. I think we should drop the cordial nation building stuff, and get on with the military mission as best as we can, and cut the thieves in Kabul out. No more Mr Nice Guy. There was always a way (a longer term way) to steal the people away from the so-called national and… Read more »

And then convene an inquiry into what has happened to the United States Military since Viet Nam – how it has been discredited, disabused, hog-tied, disenfranchised, turned into some kind of ‘peace corps’ and now, thanks to Obama, is about to be whittled down to the size and capability of that of Lichtenstein.

Karzai has made his own bed, let them lie in it. A couple years down the road when the lefties are fussing over the plight of the Afghan people under the thumb of the fundamentalist Taliban oppressors we’ll say, “We could have fixed that but you didn’t want to.” Or in Army terminology, “Eat Sh*t and Die.”

The mission as it was under Bush had a mandate, had some good ideas, and had goals that in some cases were rational to expect success in. At that point, the cost in American lives was at least worth contemplating. Now, with the surrender monkeys in charge of the game, there is no mission, no mandate, no plan. At this point it is just a meat grinder. Considering that we have 9 more months of the downward spiral, I’d say there was nothing happening now but American lives lost for no good purpose. I say sprint for the Chinooks under… Read more »

beaglescout / 2 months ago
“The rapist is you” is the new feminist battle hymn of defamation against everyone insufficiently woke and feminist. So you and you and you and me and everyone is now a rapist. Just ask them.
Read More
beaglescout / 2 months ago
Charles Hurt recognizes what I believe many of us already believe to be true, that Barack Obama’s administration, by spying on American citizens at home, foreign citizens in their home countries, and even on political rivals in their home, offices, and private political meetings, was a far more dangerous threat than Watergate to America’s People, government, and Constitution, and that it made Watergate look like a pale, drooping weed next to the vigorous, overgrown, and poisonous thicket that was the Obama administration’s corrupt legacy. And the viciously mendacious mainstream news media, the Liar Media as we sometimes call it, comes out even worse if that is possible than Obama.
Read More
beaglescout / 2 months ago
Meanwhile, in Pensacola FL, site of the recent murder of three young sailors who were viciously slaughtered in a premeditated act of Jihad by a Saudi transfer student, the route to the cemetery was lined with thousands of sailors and marines saluting their dead brother in arms.
Read More
beaglescout / 3 months ago
The US needs to bring back the Ellis Island concept to regulate immigration along the Mexican border. We realize that more desire to enter the US than the US can accept. Some will always be rejected, such as criminals, psychopaths, terrorists, lazy bums looking for a handout, and carriers of dangerous diseases and parasites. Some will usually be rejected, such as those with no work history. And some should be admitted to the US. But the process needs to be made more fair, expeditious, decisive, and clear. Creating such centers in San Diego, Nogales, El Paso, Laredo, and Brownsville would be a great start. What say you?
Read More
vassarbushmills / 3 months ago
WORK My dad once said that “Work is like a hat you put on your head. Even if you don’t have any pants you don’t have to walk down the street ashamed of your ass… …If you have a hat.”
Read More
vassarbushmills / 4 months ago
(From a book written in 1947) describing children of privilege when there were far fewer of them;  a description of French children of plantation owners around 1800 in the Caribbean: There isn’t one who hasn’t the temper of the devil, the vanity of a peacock, the domineering instincts of a bully and a coward. They’re little despots, little vile-tempered, foul-mouthed tyrants, thinking only of material goods and display, caring nothing for things of the intellect, nothing for the improvement of their minds, nothing for religion.” Anyone who reads this immediately draws an association with American youth of today. But then on deeper reflection, the children of privilege and great wealth come to mind, and that lineage goes as far back as the titular ownership of land, to the ancient Greeks at least. Even Greek ideals of government and law were based on this hereditary ownership of land. These children have always been with us.
Read More
vassarbushmills / 6 months ago
The Rifle as Phallic Symbol You may be too young to remember, but in the 60s certain cars were considered phallic symbols, for men short on other attributes. They produced 1000’s of gag lines in film. These semi-auto rifles that look like he-man weapons came from the same wannabe he-men of the 90s. And those he-men generally arose from the video game culture beginning in the 90s and generally agreed to have been a major cause of the Columbine shooting in ’97.
Read More
vassarbushmills / 6 months ago
Fixing the System to Fix the Problem The Left believes that the more people they cause to be killed with guns will grow their argument that only their government should have guns legally. So look for there to be more shootings until they can grab that power. The one thing they aren’t short of are those lab rats they produce to pull the triggers. You see, almost every mass shooting for the past 25 years had been carried out by people who should have been in the system, and on paper, that “system” has already professed to have the authority and ability to deal with them, for fifty years. Not. Only people with common sense will know where to turn first. And how.
Read More

Wisdom of the Ages