Saying goodbye to Iraq, but for how long?

It’s strange seeing the last of the troops pulling out of Iraq. As many of you know, I was there at the Iraq/Kuwaiti border at the kickoff, and after seeing the initial waves of Marines and 3rd ID troops pouring through the breach we were supposed to have made in the dirt berm, picturing them leaving, possibly forever, seems so far-fetched somehow. 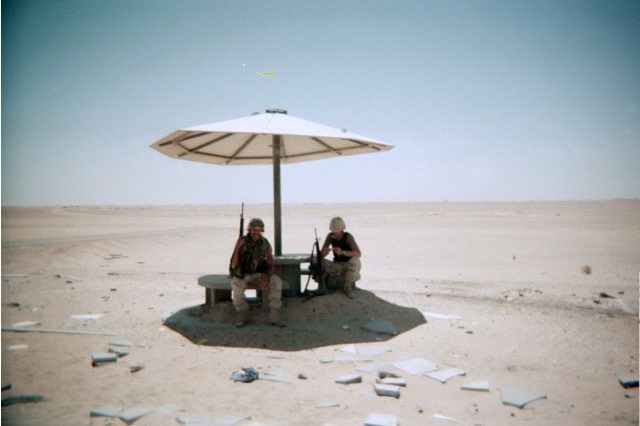 I still picture Iraq the way it was in 2003 in my head, people lining the roads waving, kids hoping I’d throw the Skittles from my MRE their way (I hate them things), old women raking salt from what looked like mud puddles to me. They thought the bottled water we threw their way was like nectar from heaven.

I know things have changed over there since way back then, but one thing I’m pretty sure hasn’t changed is the threat Iran poses to the peace our forces tried desperately to secure in the intervening years.

Not only the threat from Iran, but the country was and remains split by tribal and religious factions that could someday undo everything. Blackfive describes the situation here;

…there are intense tribe/clan rivalries, and these are increased by religious differences.  A Sunni I spoke to at length would admit that some individual Shia/Shi’ites were okay; but, was quick to say that no Shia could be trusted.  You can pretty much reverse that to get a conversation with a Shia.  Kurds, Christians, Sufi, and others in the area pretty much felt the same way.

Read the whole thing to understand what’s going on there now.

Sometimes when I’m at work at my part-time job towing cars, I’ll come up on a scene of a car in a ditch. The hopeless look on the faces of the vehicle owners as they look at their car says what their expectations are; they are going nowhere any time soon. But I look it over and many times see things differently. I may see a car basically undamaged except for a broken light and a flat tire from hitting the curb. With the equipment I have available and some skill, I can coax the car out of the ditch, change the tire, and they are back on the road in shock at their good fortune.

I saw that in Iraq, too. People who expected the US to come storming in shooting people in the backs of the head (much the way the left  and many Ronulans like to portray it today), destroying everything in sight and enslaving them. The look of wonder in their faces as we not only didn’t kill them but tossed them MREs and water bottles was a sight to behold.

We got their car out of the ditch and put them back on the road to wherever they’re headed today, and we hope they get there in one piece. We also hope to not see them any time soon in the same situation.

Now today as many of the last bunch to leave Iraq are arriving at Ft. Hood, we remember the folks in Afghanistan. Here’s to hoping images on Pepsi cans don’t bode bad things to come.

Erick Brockwayhttp://www.erickbrockway.com
Work seven days a week at two jobs, a newly RETIRED EO1 (E6) in the Navy Reserves (Seabees), blog when I can from cellphone and computer. @erickbrockway #catcot #tcot Currently living in Camarillo, CA, about 45 miles North of LA. I have a wife (20+ years) son, and two daughters.
Previous articleTruth and Love Must Prevail Over Lies and Hatred
Next articleIs PepsiCo Catering to Muslims?