Well! Give me peace in my day.

I am skeptical of the retreat from the fight. I hear a lot of arguments for sticking it out as long as possible, delaying the inevitable as long as can be, even if it brings greater evil later. That is “Vote Romney” in a nutshell.

Perhaps that is not the best course. I think I agree with Thomas Paine on this question:

“I once felt all that kind of anger, which a man ought to feel, against the mean principles that are held by the Tories: a noted one, who kept a tavern at Amboy, was standing 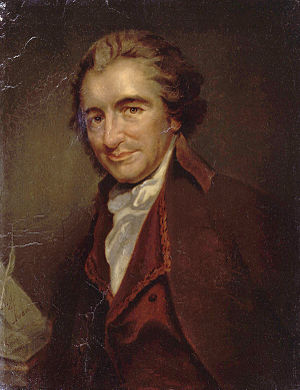 at his door, with as pretty a child in his hand, about eight or nine years old, as I ever saw, and after speaking his mind as freely as he thought was prudent, finished with this unfatherly expression, “Well! Give me peace in my day.” Not a man lives on the continent but fully believes that a separation must some time or other finally take place, and a generous parent should have said, “If there must be trouble, let it be in my day, that my child may have peace;” and this single reflection, well applied, is sufficient to awaken every man to duty. Not a place upon earth might be so happy as America. Her situation is remote from all the wrangling world, and she has nothing to do but to trade with them. A man can distinguish himself between temper and principle, and I am as confident, as I am that God governs the world, that America will never be happy till she gets clear of foreign dominion.” The Crisis

Next let’s look at what Patrick Henry had to say in the VA legislature concerning a call to raise a militia.

Mr. President, it is natural to man to indulge in the illusions of hope.We are apt to shut our eyes against a painful truth, and listen to the song of that siren till she

transforms us into beasts. Is this the part of wise men, engaged in a great and arduous struggle for liberty? Are we disposed to be of the number of those who, having eyes, see not, and, having ears, hear not, the things which so nearly concern their temporal salvation? For my part, whatever anguish of spirit it may cost, I am willing to know the whole truth; to know the worst, and to provide for it.

They tell us, sir,that we are weak; unable to cope with so formidable an adversary. But when shall we be stronger? Will it be the next week, or the next year? Will it be when we are totally disarmed, and when a British guard shall be stationed in every house? Shall we gather strength by irresolution and inaction? Shall we acquire the means of effectual resistance by lying supinely on our backs and hugging the delusive phantom of hope, until our enemies shall have bound us hand and foot? Sir, we are not weak if we make a proper use of those means which the God of nature hath placed in our power. The millions of people, armed in the holy cause of liberty, and in such a country as that which we possess, are invincible by any force which our enemy can send against us. Besides, sir, we shall not fight our battles alone. There is a just God who presides over the destinies of nations, and who will raise up friends to fight our battles for us. The battle, sir, is not to the strong alone; it is to the vigilant, the active, the brave. Besides, sir, we have no election. If we were base enough to desire it, it is now too late to retire from the contest. There is no retreat but in submission and slavery! Our chains are forged! Their clanking may be heard on the plains of Boston! The war is inevitable–and let it come! I repeat it, sir, let it come.

It is in vain, sir, to extenuate the matter. Gentlemen may cry, Peace, Peace– but there is no peace. The war is actually begun! The next gale that sweeps from the north will bring to our ears the clash of resounding arms! Our brethren are already in the field! Why stand we here idle? What is it that gentlemen wish? What would they have? Is life so dear, or peace so sweet, as to be purchased at the price of chains and slavery? Forbid it, Almighty God! I know not what course others may take; but as for me, give me liberty or give me death!

Look at this matter just passed out of the US Senate, allowing the military or president to detain American Citizens on American Soil, without trial, indefinitely. Is this what it looks like when we get stronger?

There are all too many laws and case law out there limiting freedom and trampling God given rights. Many not only accepted by “conservatives” by embraced by them.

Today even the unemployed believe in the American System. In five years they may well beg the man with bread to be their king.

When somebody tells me I should vote for the socialist mush guy who might delay, but definitely not prevent, the inevitable collapse or even calls me cowardly for refusing to deliver that vote, I really have to wonder.

There are two kinds of conservative on this issue today, both are genuinely conservative.

One says, “Well! Give me have peace in my day.” Yes the tory was conservative. As Jefferson said, we do not change governments easily or lightly.

I think it is obvious our government has already walked away from us.

The other side of this argument says, “If there must be trouble, let it be in my day, that my children may have peace.” They recognize Henry’s truth, “There is no retreat but in submission and slavery! Our chains are forged!” More importantly our children’s chains are forged.

The socialists have won thus far because they understood the truth in the adage, “The squeaky wheel gets the grease.” Or the confrontational SOB gets the concession.

The crisis is upon us, the collapse of the American Republic at hand. As in Paine’s day, I do not think there exists today an intelligent man who does not see the inevitable lain out before us. I do not know if this will degenerate into civil war but I do know liberty is worth such a war. We can only hope a sufficient show of resolve and strength might avoid it. This fight starts in our party and how can we hope to win by selecting their general to lead us?

There is no reason to believe electing some mush dirt bag simply because he has an “R” after his name will accomplish anything greater than granting the blacksmith time to forge stronger chains.