Yes. Abortion is not healthcare as the featured image tells us.
It is murder in my book. From the day of conception. More angst and shock from an undercover caller to a New Mexico abortion clinic who tells a woman who tells the answerer she is 26 weeks pregnant and wishes a late term abortion because her husband lost his job, that abortion will be paid for by Medicaid.

The website “Fund Abortion Now” even coaches women on how to enroll in Medicaid “fast” so if they live in one of these states they can get that abortion. If you can stomach it, below is the call from a woman testing the waters of the Southwestern Women’s Options abortion clinic in Albuquerque run by “doctors” Curtis and Glenna Boyd:

On the video you will hear talk of “BPD measurement” which stands for “bi-parietal diameter” which is a measurement of the baby’s head from side to side. It is used to assist in dating the pregnancy. Multiplying the number by 4 will give a rough estimate of the number of weeks into the pregnancy.

And if this isn’t enough, this same *clinic* has had the paramedics visit 11 times in the last 2 years for post-abortion emergencies. According to this video the abortionists are Curtis Boyd, Susan Robinson and Shelley Sella.

I’m not even going to call these people *doctors.* They are really *murderers for hire* at the taxpayer’s expense.

Yesterday Congresswoman Michele Bachmann (R-MN) introduced the “heartbeat bill” which if passed would require abortion providers to make the heartbeat of the unborn child visible and audible to the woman considering an abortion.

They are inhuman butchers

House voteds to stop this, which is about all we can do. Senate won’t take it uo, OBama will veto.

Their time is coming. 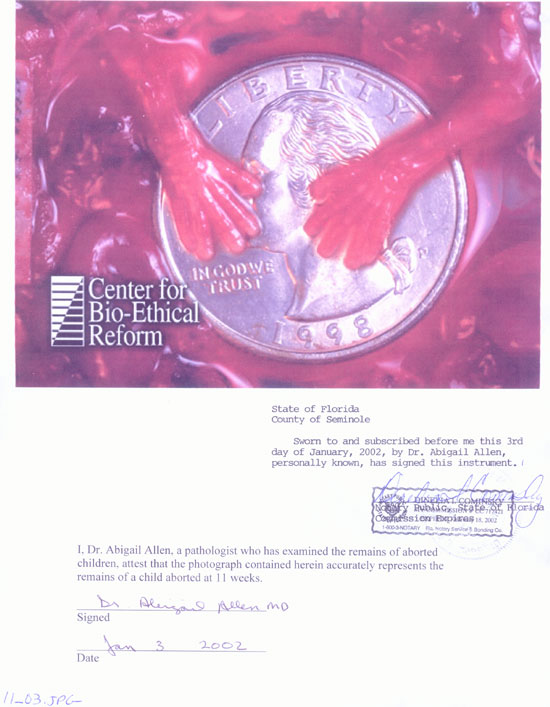 The LORD said, “What have you done? Listen! Your brother’s blood cries out to me from the ground. Gen 4:10