HomeRecommendedAs much as many on the left wish it were so, #OccupyWallSt...
Recommended

As much as many on the left wish it were so, #OccupyWallSt is NOT “Like Arab Spring”

One of the more breathtakingly stupid memes of the Occupy Wall Street protest (and there are many) is the constant self-aggrandizing comparison to the “Arab Spring.” There are many reasons to be cautious in being overly celebratory of the Mideast revolutions even without comparing it to a “revolution” in America. Even the slightest and most cursory musing upon the vast differences in our cultural and political institutions and histories should prevent any simplistic generalization. 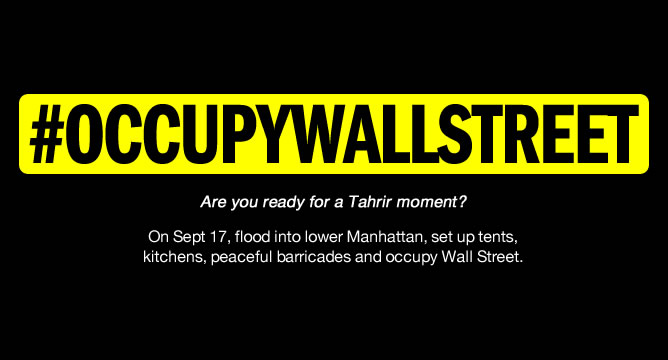 What El Supremo is referring to is a somewhat (to me anyway) exasperated Facebook post from the manager of the US Embassy in Damascus, Syria’s Facebook page [my emphasis throughout];

We recently put up an article about the Occupy Wall Street protests in the USA — there is lots of news about it on Syrian television stations.

For sure there is a lot of unhappiness in America about the economic situation. Unemployment is relatively high – nine percent. Housing prices keep falling, hurting more families. There is much debate between the two main American political parties about how to fix the U.S. economy.

We don’t know exactly what will happen next. What we do know is:

* the US will have national elections in November 2012 that are not under the control of the American intelligence establishment but rather an independent election authority not controlled by the President or Congress;

* the Occupy Wall Street organizers will be entirely free to run as election candidates or to organize to support candidates;

* Occupy Wall Street groups will not be allowed to destroy public or private property, but they can organize more protests in other cities and they can say whatever they want about the U.S. government without being arrested or shot;

* the police will not shoot thousands of protesters;

* some Occupy Wall Street organizers have been arrested for disturbing public order (blocking traffic) but they won’t be tortured, and no family will receive the body of a protester bearing torture marks.

* the international media and NGOs are watching and reporting on the Occupy Wall Street protests without interference from the government;

* the Occupy Wall Street organizers will be free to talk to any American or foreigner who wants to talk to them without fear of arrest;

* the U.S. government may complain that some countries’ currency policies are hurting the U.S. economy, but the US government will not tell the world that there is a vague foreign conspiracy for which it lacks any specifics or evidence but that it says is encouraging the Occupy Wall Street or other protest movements.

Something to think about…

I know when you’re drawing ridiculous comparisons between yourself whining about having taken useless college courses that left you totally unprepared for life, much less to make a living *quick intake of air* and people dying overseas at the hands of a brutal dictator because they want to be *free, there’s not a lot of real thinking involved. More grasping at straws.

Next they’ll be comparing themselves to the Tea Party.

*I say “free”, but as we’re seeing in Egypt (or are about to), “free” might end up meaning “free to choose a replacement repressive regime that sends their children to their perceived enemies strapped with very real explosives.

Crossposted to A Tow Dog

Erick Brockwayhttp://www.erickbrockway.com
Work seven days a week at two jobs, a newly RETIRED EO1 (E6) in the Navy Reserves (Seabees), blog when I can from cellphone and computer. @erickbrockway #catcot #tcot Currently living in Camarillo, CA, about 45 miles North of LA. I have a wife (20+ years) son, and two daughters.
Previous articleUndercover shocker: Medicaid will pay $9K for late term abortions
Next articleGOP Establishment to Tea Party: Get Lost