Your healthcare benefits were once designed by the insurance companies, your employer and the state where you lived. That’s over. At this moment, the experts at the Institute of Medicine are drawing up rules for what the government will mandate as basic health care coverage. The plan they come up with is what will be required for insurance companies to provide. If it brings any comfort, Health and Human Services Secretary Kathleen Sebelius said officials would hold “listening sessions” around the country before any final decisions are made. Polls indicate the public still supports total repeal of Obamacare.

There will be lobbying efforts from employers, insurance companies and consumer groups attempting to influence the coverage that will be required. From the Associated Press:

Actually, work on the benefits package is already well under way within the HHS department. And on the outside, a huge lobbying campaign to shape the final package is about to take off.

Employer groups – particularly those representing low-wage industries – want to keep benefits fairly basic. Since the government is going to be subsidizing coverage for millions of people, a generous plan will drive up costs for taxpayers, they argue. But consumer and patient advocacy groups that helped pass the overhaul law want to make sure their priorities are included.

In its 300-page report, the Institute of Medicine panel stressed that the package has to be affordable if Obama’s overhaul is going to stand the test of time.

So, we expect government to come up with something that is affordable. What’s the likelihood of that? What federal government program is anywhere close to solvent? Can we assume this news from a “government panel” is really just cost containment? At least the government is being fair since in 2009 they told women they could start skipping their annual mammograms.

Americans were told the health care bill would have to pass for them to find out what’s in it. Today a majority of Americans are hoping that the Robert’s court will kill Obamacare before what’s in it can be put into practice.

Texas native. Conservative small businessman with 31 years experience. Government should roll back the nanny state. No country can tax its way to prosperity. The question isn't who will let me but who will stop me?

You know what would be a great idea? If we took about a half a billion people and set up a leviathan who will manage every jot and tittle of their health care. That would be great wouldn’t it? /snark 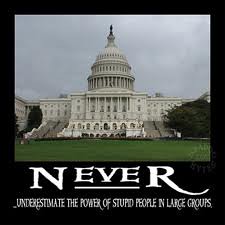