October is just around the corner. It’s the month of Fall festivals, football, and Halloween. It is also the month designated as breast cancer awareness month. But I don’t wear pink ribbons. I don’t buy Yoplait yogurt with the pink lids. I don’t contribute to the Susan G. Komen Foundation. It’s mission is noble – “to save lives and end breast cancer forever”. However, who they contribute to is not noble. They are the opposite of noble. The Susan G. Komen Foundation contributes hundreds of thousands of dollars every year to Planned Parenthood. So, no, I don’t think pink in October.

In response to increased pressure by pro-life groups, Komen trots out the predictable talking points. The funds are allocated “only” for breast cancer screenings. This may be the intent but the same place where women go for a breast screening is typically the same place they go for an abortion. Funds that are donated to Planned Parenthood help to keep the lights on, period. We must dry up all of Planned Parenthood’s sources of income. If we can strip them of their funds, they will cease to exist. No money, no building, no abortion.

Some will say that by refusing to support the Komen Foundation you limit all the other good work they do. So be it. I can take those same dollars that would have gone to the Komen Foundation and donate them to another organization with the same mission. One that doesn’t support Planned Parenthood. One that doesn’t send funds to an institution that aborts 330,000 babies a year.

"She could never be a saint, but she thought she could be a martyr if they killed her quick." ~Flannery O'Connor

Precisely. As soon as I found out that SGK financially supported Planned Parenthood I quit all contributions to them as well.

Here is the chart of PP’s expenditures. They are an abortion mill and nothing else. 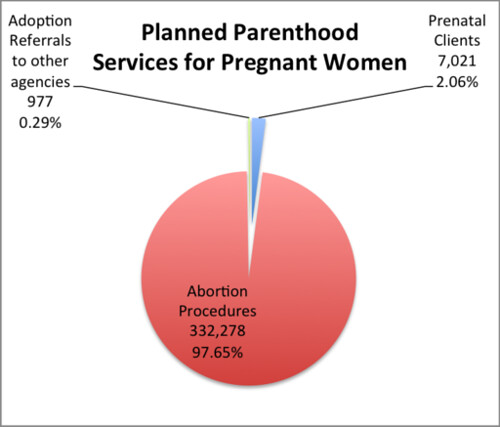