The President of the United States is, at every moment in time since June 6, 1944, the most important and powerful person in the world. He also bears the most responsibility. He is more than just the titular head of the most powerful nation the world has ever seen. In that office resides the personification of human liberty on earth, the beacon to hearts of all men who would be free, the guardian and protector of freedom and virtue.

It certainly wears on a man, for it is a burden not suitable for common men or even strong men, but for great men. Some prove more equal to the task than others, but the 4 or 8 years in the office age the man visibly no matter how well he wears the mantle. It is the responsibility; the lack of sleep; the lack of any unaccountable leisure, privacy, or a moment when you can let down the mask, for 1461 consecutive days; the constant pull of people who want something from you, want to exploit their connection to you, or want to influence you; the weight of the entire world on your shoulders; the constant vigilance against foreign enemies; the burden of young soldiers who die under your command; the constant infighting both in-party and against the opposition party; the blame that falls your way, deserved or not; the knowledge that history will judge you, and you may have not done enough in the time you were given; the stress that your life and your choices put on your loved ones. It goes on and on, and I bet I don’t even know the 1/4 of it.

Real Men are Large and In Charge

We could talk about many qualities that make up the man and in these 50 articles, we’ll hit on most of them. But today I focus on this: the great president is large and in charge. He takes responsibility, takes ownership, for all that falls under his purview, both good and bad. He won’t have it any other way. The buck stops with that guy. All of that is true for many reasons, among them:

Don’t miss that last point. Any grown-up responsible man of character instinctively directs blame to himself and away from others. He is slow and deliberate in throwing blame around. And here we are not talking about a great president; we are talking about an ordinary man.

Now against this backdrop, let us examine barack. Here’s a guy for whom it is not only not his fault, it has NEVER been his fault.Everything he does is noble and good. Everything his political opponents do is despicable and evil. He is unerringly smart and wise; his opponents and detractors are stupid, racist, and unpatriotic. His predecessors left him such an awful mess that even he — Superman, Abraham Lincoln, Mother Teresa, and Doctor Zhivago all rolled into one adorable creation–is having trouble fixing it, after three years of heroic effort.

And blame. My goodness. I’ll leave out my opinion of how much of the mess that is America is his fault. Let’s even stipulate (quite generously) that NONE of this mess is his fault. Even if that were true, did you ever hear of a guy so quick to blame others?

Limbaugh compiled a short and non-comprehensive list (Youtube (h/t therightscoop.com) and transcript) of utterances of blame from the mouth and mind of barack:

Not a Great President. Not Even a Competent Man

Actually, the list of “Obama blames” could go on all day. When barack is measured against the backdrop of the job requirements in the first paragraphs above, when stood up alongside men like Ronald Reagan, George Washington, and even John F Kennedy, it becomes perfectly clear.

It’s not just that he’s a pathetic president. He’s not even a competent man.
For the 4th of 50 reasons, he’s not my president.

The weapons had evolved, but our orders remained the same: Hunt them down and kill them off, one by one. A most successful campaign. Perhaps too successful. For those like me, a Death Dealer, this signaled the end of an era. Like the weapons of the previous century, we, too, would become obsolete.

Pity, because I lived for it.

The Second Amendment vs the Divine Right of Kings; “Go to Gulag”

Great list, EPU. It’s truly stunning how this man refuses to take responsibility for anything. Whoever wins the Republican nomination should run ads contrasting Harry Truman’s statement that ‘the buck stops here’ interspersed with the countless number of Obama quotes such as these and then tie it all to a lack of leadership.

And they can add this latest ‘blame game’ to the list: https://www.fox11online.com/dpps/news/national/obama%3A-low-rating-shows-unhappiness-with-congress-_3919024

You read that right, folks. President Obama has now decided that the reason he’s so unpopular is all…wait for it… Congress’s fault.

The man disgraces the office as much an any man ever has. We the People are being prevented from bailing ourselves out, ie making a living, by this man and his party. We are having to wait him out, essentially as we watch our wealth and power decline.

Ace brought a picture from S. Weasel (an American in England) that illustrates your point quite well. 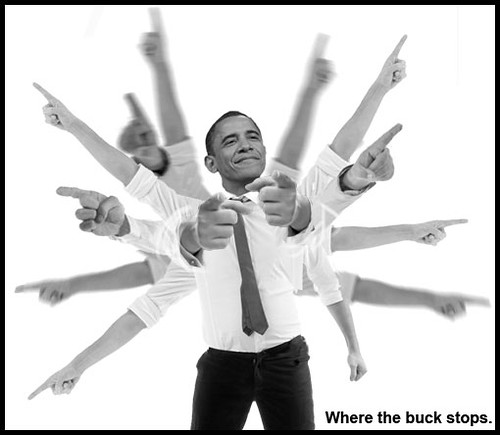 This needs to go Viral.