A harbinger of doom; that is what President Obama has become. So says WaPo columnist Kathleen Parker. Oh Kathleen! You’ve come a long ways baby. I’m glad you see how the hope and fundamental change have resulted in fundamental destruction. The president looks desperate because he owns an economy made worse by his massive government intervention. No amount of glad-handing and bus tour baby-kissing can change the facts.

A bus tour is not a bad idea to reconnect with everyday people, but this one is ill-timed and looks desperate. If you’re confident in your presidency, you ignore the impotent opposition while they slug it out.

Otherwise, the bus is a stab in the heartland. We’re a red, white and blue nation, colors of optimism and hope. Or, thanks to Obama’s rhetoric, we’re at least a purple nation. Lavender polka dots would have been better than a black mass that penetrates amber waves of grain like an armada of doom.

No doubt there are good reasons for the color and construction. But as political symbolism, the mega-hearse looks like a creation out of Batman and the president appears as Paul Revere of the Apocalypse.

In a way, I would like to welcome Parker as she tries to come back from the dark side of flirtation with hopey, changey. Red, white and blue is so much better. Sorry though, the same as with Peggy Noonan, I can not forget how you were unfaithful. You were Benedicts of fundamental change. Some broken hearts never mend.

Texas native. Conservative small businessman with 31 years experience. Government should roll back the nanny state. No country can tax its way to prosperity. The question isn't who will let me but who will stop me?

Like the plague, Death came riding a black horse, spreading disease, despair and depravity amongst the survivors.

This man revels in causing misery for his own enjoyment and glory no matter the result.

Parker is only criticizing the tactic and it’s optics, not the slimy substance of Jug-Ear’s policies & positions. Who cares if the crappy bus trip was a bad PR move? What needs to be shot down is the entire roadshow that is the current administration, not the color of his stupid bus. Kathleen still doesn’t get it.

Don’t they have a Color Czar with six figure salary to boot, to check these things out before the bus rolled?

Obama must have been miserable having to ride on a bus to visit the great unwashed masses.

No, I have no sympathy for Parker or Noonan, and any of the other so-called conservatives who are really Dems in disguise. They’ll be more frantic as their ‘chosen’ one disintegrates, and takes the country down with him.

If you read between the lines, I saw “boy” in there.

Obama leads the funeral procession for American greatness and freedom: 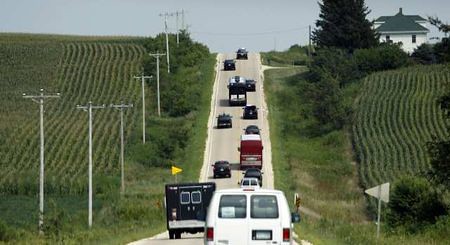 This is an instant classic!