HomeRecommendedA boy would like you to remember his Dad
Recommended

A boy would like you to remember his Dad

I think we can do that

Braydon’s dad was one of the pilots on the Chinook helo that was shot down over the weekend, killing all aboard.

The news reports have been full of pictures of the SEALs killed in the crash, and Braydon (10 years old) wondered why there weren’t any pictures of his dad? His mother told him “… it was because people had gone online and were posting photos.

Braydon wanted to do that, too. He wanted to make sure everyone knew that his father was a hero too, so he did just that; 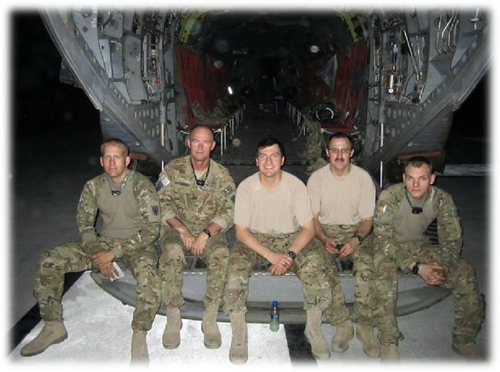 My father was one of the 30 US Soldiers killed in Afghanistan yesterday with the Seals rescue mission. My father was the pilot of the chinook. I have seen other pictures of victims from this deadly mission and wish you would include a picture of my father. He is the farthest to the left.

His post is going viral. I wrote a little note on the iReport page he posted, when I started writing there were 860 other posts there. It took me maybe 5 minutes to post mine, and when I did, the new count was up to over 1,000.

CNN has a tribute page set up for casualties from overseas, and Bryan Nichols’ page is filling with notes from all over.

This brings up a question; it’s so easy to get wrapped up in the “SEAL Team 6” guys killed on that mission, and so hard to remember that warriors are killed in action nearly every day. How do we remember them all? Each one is a life given to his or her country; each likely has a family in anguish.

I made a video over the weekend as a tribute, and it messed me up for the remainder of the weekend. There’s just so many and it’s so easy to simply tune it all out to protect oneself from the constant bombardment. Each one a brother or sister in arms, each one important; and so few are honored nationally or even to have their sacrifices mentioned at all on a busy news day. It takes a mass casualty event to get the nation’s attention anymore.

Well, Braydon Nichols if you read this someday, you did well. You punched through the static surrounding the event of your dad’s death and made it special to everyone, and made sure the nation wouldn’t forget that he’s no less a hero than the men he carried aboard his helicopter.

Erick Brockwayhttp://www.erickbrockway.com
Work seven days a week at two jobs, a newly RETIRED EO1 (E6) in the Navy Reserves (Seabees), blog when I can from cellphone and computer. @erickbrockway #catcot #tcot Currently living in Camarillo, CA, about 45 miles North of LA. I have a wife (20+ years) son, and two daughters.
Previous articleChange I Can Believe in (What I’m Doing)
Next articleYonder are the Hessians