No less a prestigious Democrat than Sen. (and former Democrat Presidential pick) John Kerry says so, so for millions of Americans, sadly, it must be true;

“I believe this is without question the Tea Party downgrade,” Kerry said on NBC’s “Meet the Press” in a Sunday interview. “This is the Tea Party downgrade because a minority of people in the House of Representatives countered even the will of many Republicans in the United States Senate who were prepared to do a bigger deal.”

If John Kerry’s opinion isn’t enough for you, Obamacrat David Axelrod is also saying “this is essentially a Tea Party downgrade.”

These are the official leftist talking points for the week of August 7, 2011, to the 12th. You’ll next be hearing Debbie “Two Names” Wasserman-Schultz doing a tirade about it to keep the idea alive and in the news cycle. The leftist and liberal blogs will be picking it up, and mutton-heads like Ed “Not Related to Two Names” Schultz will embarrass themselves on both radio and TV saying derogatory things about – whom exactly?

The “Tea” Party? I’m not clear on where their national headquarters is, exactly. Looking for who the TNC (Teaparty National Committee) chair is, and I’m finding nothing – nothing at all. Can’t be a political party, then, the way the Democrats seem to be portraying it.

Okay, maybe is a “shadowy puppet arm of the GOP,” similar to what MoveOn.org is to the Democrat Party? Problem is, I can’t seem to find a “Meester Beeg” like a George Soros is to the MoveOn.org group. Possibly the much aligned and certainly evil “Koch” brothers are the target of all this vitriol from the left? Plus there seems to be no cohesive organization to this group called “Tea Party” whatsoever. I did a Google search, hoping to find photo evidence of this racist mystery arm of the GOP; 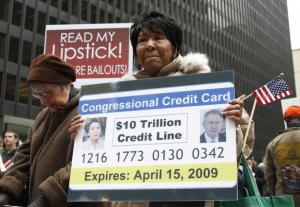 What should become obvious to anyone but an ordinary Democrat is that the so-called “Tea Party” isn’t a political party at all; it is ordinary American people who are fed up with both political parties. It took both parties to get us to the brink of this disaster, and none escape blame.

What the leftist Democrat is trying to do is separate ordinary American citizens from the mythical “Tea Party” they’ve constructed in their own heads; divide and conquer and thereby weaken the opposition to runaway spending and taxes. Simple Alinsky tactics that they’ve been using on Americans for years.

These tactics are being employed at the very top of the Democrat Party;

“Obama learned his lesson well. I am proud to see that my father’s model for organizing is being applied successfully beyond local community organizing to affect the Democratic campaign in 2008. It is a fine tribute to Saul Alinsky as we approach his 100th birthday.” –Letter from L. DAVID ALINSKY, son of Neo-Marxist Saul Alinsky

Obama helped fund ‘Alinsky Academy’: “The Woods Fund, a nonprofit on which Obama served as paid director from 1999 to December 2002, provided start-up funding and later capital to the Midwest Academy…. Obama sat on the Woods Fund board alongside William Ayers, founder of the Weather Underground domestic terrorist organization….  ‘Midwest describes itself as ‘one of the nation’s oldest and best-known schools for community organizations, citizen organizations and individuals committed to progressive social change.’… Midwest teaches Alinsky tactics of community organizing.”

Hillary, Obama and the Cult of Alinsky: “True revolutionaries do not flaunt their radicalism, Alinsky taught. They cut their hair, put on suits and infiltrate the system from within. Alinsky viewed revolution as a slow, patient process. The trick was to penetrate existing institutions such as churches, unions and political parties…. Many leftists view Hillary as a sell-out because she claims to hold moderate views on some issues. However, Hillary is simply following Alinsky’s counsel to do and say whatever it takes to gain power.

“Obama is also an Alinskyite…. Obama spent years teaching workshops on the Alinsky method. In 1985 he began a four-year stint as a community organizer in Chicago, working for an Alinskyite group called the Developing Communities Project…. Camouflage is key to Alinsky-style organizing. While trying to build coalitions of black churches in Chicago, Obama caught flak for not attending church himself. He became an instant churchgoer.” (By Richard Poe, 11-27-07)

So, ordinary American and sometimes “Tea Party” event attendee, as you sally forth next week and are bombarded by news clips of Democrat politicians armed with their talking points about the “Tea Party Downgrade,” remember they are attacking you. You are the Tea Party.

As I’ve said before;

We are there in the various Tea Party groups, leaderless, but not rudderless. We steer always toward the Constitutional principles this nation was founded upon. The left will use its Alinsky tactics; they will call us “racist” when they run out of any other ideas, but we know their playbook now, and it bounces off.

So let it bounce, and turn it back on them by reminding your friends, relatives, and neighbors; “I AM the ‘Tea Party’ and I don’t resemble that remark!”

Crossposted to A Tow Dog

Erick Brockwayhttp://www.erickbrockway.com
Work seven days a week at two jobs, a newly RETIRED EO1 (E6) in the Navy Reserves (Seabees), blog when I can from cellphone and computer. @erickbrockway #catcot #tcot Currently living in Camarillo, CA, about 45 miles North of LA. I have a wife (20+ years) son, and two daughters.
Previous articleDoes This Country Have An Obesity Problem? Or A Hunger Problem?
Next articleA Long Train of Abuses