Well, it isn’t easy. Conservatives tend to have well-ordered, structured thinking processes. We have a great regard for fairness, and instinctively seek that in the public square. Liberal brains tend to combine emotive, saccharine sentimentality with the power drives of a serial killer, blissfully unaware of the contradictions in their positions on public issues and the continuing failure of their policies in the real world.

The liberal brains have been on a tear this week. Having wrecked the public finances with their reckless spending, they are whining that the Republicans are not passing tax increases to pay for more of their failed programs. As if tax increases ever work in recessions. And this just a few months after President Obama signed on to an extension of the Bush tax cuts, the one policy initiative over the past decade that left tangible evidence of success.

They are equally unhinged on social issues. A few years ago, the left could not pull the plug fast enough on the hapless Terry Schiavo. They recoiled from Sarah Palin’s choice not to abort her special needs baby. But this week they marched under the banner of those seeking to halt the execution of brutal sex killer Humberto Leal Garcia. The killer’s status as a Mexican national catalyzed their concern, because in the murky recesses of the liberal brain a multicultural connection creates instant victimhood. The actual murder victim? The left does not want to hear about the awful fate of Adria Sauceda.

We can not deal with the liberal brain on its own terms. Its cries for compromise are a ruse to delay things until the left can stage a political comeback using their time honored arsenal of class warfare and race card tricks, abetted by a complicit media.

There was a great phrase used in a television commercial some years back. “You don’t get what you deserve, you get what you negotiate.” I would turn that around a little. The Republican leadership must adopt a tough-as-nails approach to the budget, spending cuts, Obama’s overreaching federal bureaucracy and the proliferating scandals of this administration. Let them scream and rant and rave and yell and call us names, but don’t give in. Negotiate to give the left, finally, what it deserves.

Assimilate or be squashed.

This is the human brain on liberalism…

well said…liberal inconsistency has me feeling a little lumpy lately

We actually have verifiable information backing up your claims. I present to you: 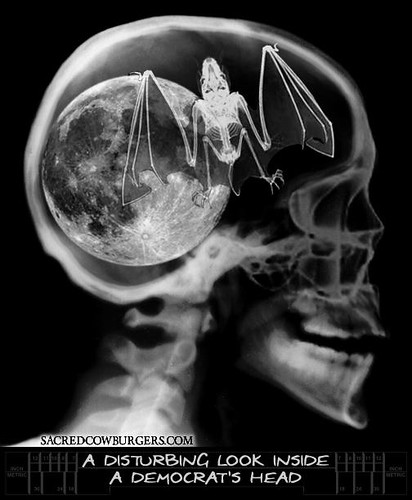 Unhinged and bizarre. Liberal in this era means the most restrictive, power-mad, tyrannical state. All as a means to an end. There is an irrationality to the liberals. The inconsistencies you point out – their efforts to keep a vicious murderous thug alive, or to believing that a Down’s Syndrome baby should be aborted, and then the Terry Schiavo case, where they believed she should die, though she was an innocent victim of life’s tragic events.

Payday someday, not always on Friday.

This is actually a bit of a two-fer. Not only did the Enemy© engage in their don’t-execute-the-poor-victim convicted killer theme, but used as their vehicle a non-ratified treaty to do so. Just another attempt to advance their will through any means, codified in law when possible, otherwise, any-old-port-in-a-storm methodology. Fortunately, Perry kept it from working this time.