HomeRecommendedCalifornia Dems caught in their own trap. Cue the violins.
Recommended

California Dems caught in their own trap. Cue the violins.

California Proposition 25 was pushed hard by California unions and their Democrat allies in the legislature, ostensibly as a measure to “help end the gridlock in Sacramento” by making it easier to pass a budget. It would require only a majority vote to pass the state budget, rather than the 2/3 majority it’s been in the past.

The Proposition didn’t seem to have enough trust or support to be passed by the voters in November, so sweeteners were added; the California legislature wouldn’t get paid unless a budget was passed. Called the “On-Time Budget Act of 2010“, the specific section added says [my highlight and emphasis];

Notwithstanding any other provision of law or of this Constitution, including subdivision (c) of this section, Section 4 of this article, and Sections 4 and 8 of Article III, in any year in which the budget bill is not passed by the Legislature by midnight on June 15, there shall be no appropriation from the current budget or future budget to pay any salary or reimbursement for travel or living expenses for Members of the Legislature during any regular or special session for the period from midnight on June 15 until the day that the budget bill is presented to the Governor. No salary or reimbursement for travel or living expenses forfeited pursuant to this subdivision shall be paid retroactively.

A bill was presented to Governor Moonbeam, and squeaked in before the June 15 deadline – then was vetoed by him two days later, saying the budget submitted by the state Democrats contained “legally questionable maneuvers, costly borrowing and unrealistic savings.” In other words, the same budget California Democrats normally submit.

This time it didn’t fly. Weird, the veto coming from fellow Democrat Governor Brown who already granted special favors to state labor unions, but it did happen.

Without a viable budget in place, legislature is back to square one. Worse than that, they don’t get paid to re-hash the budget nightmare. California State Controller John Chaing (no fiscal conservative himself) said the budget “…numbers simply did not add up, and the Legislature will forfeit their pay until a balanced budget is sent to the governor.”

I’m no legal beagle, but it would seem with the wording in Prop 25 highlighted above, the Dems may have complied with the letter of the law, if not the spirit. No matter, though… 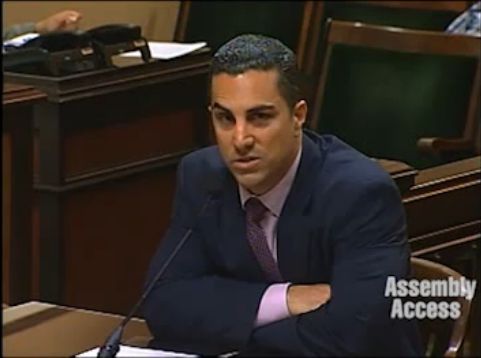 Democrat California Assemblyman Mike Gatto thus far has given the most entertaining Democrat response to not getting paid [again, my highlighting and/or emphasis];

“Our state government right now reminds me of a troop of boys lost in the wilderness. The goal is to get back to civilization, but the Governor seems hell-bent on forcing four people to take his chosen path, while John Chiang just wants to sit there and beat up on the unpopular kids. It’s always been an easy move to bash the disliked – but the truth is that such demagoguery is rapidly becoming clichÃ©, and does nothing to move the state forward. … I halted a fulfilling private sector career path to enter public service [it’s all about him?]. I now have to explain to my wife and daughter that we won’t be able to pay the bills [his daughter is one year old – bright child understanding family finance already] because a politician chose to grandstand at our expense. California has officially degenerated into a Banana Republic, with one branch of government withholding the pay of another [Who else but the California State Controller would be tasked with, you know, issuing or withholding checks?]. I wonder if the Controller plans on withholding the pay of judges if he disagrees with one of their decisions [absurd, childish, inane, take your pick].”

Give them enough rope…

As was noted above, the Democrats supported Prop 25;

Just over one year ago, when the YES on Prop 25 campaign was heating up and claiming â€œthe majority vote budget initiative will reform Californiaâ€™s budget process,â€ Sen. President Pro Tem Darrell Steinberg and Assembly Speaker John Perez, both Democrats, shared their support of the initiative: â€œI support efforts like this one that lead to Californiaâ€™s budget being approved by a majority vote,â€ PÃ©rez said. â€œItâ€™s time to end the gridlock, backroom deals and political games that come with being one of only three states that requires a 2/3 vote to pass the budget.â€

Be careful what you wish for.

I can’t think of a thing to add to that last line, except read the rest by Katy Grimes.

Erick Brockwayhttp://www.erickbrockway.com
Work seven days a week at two jobs, a newly RETIRED EO1 (E6) in the Navy Reserves (Seabees), blog when I can from cellphone and computer. @erickbrockway #catcot #tcot Currently living in Camarillo, CA, about 45 miles North of LA. I have a wife (20+ years) son, and two daughters.
Previous articleThe Left’s Economic Policies and the Definition of Insanity
Next articleBy An Angel’s Kiss, SGT James W Harvey II