I am from Joplin, MO. Born in St. Johns, raised in the 15th St. Wal-Mart, both destroyed on May 22. We are a conservative area, right in the middle of the buckle of the Bible belt, so Obama has never been particularly popular right here, but he’s really not popular now.

I attend a moderately large church for our area, where we had about 300 or 350 in church on Sunday morning. In the prelude to the sermon, our pastor was talking about some of the ongoing issues related to the tornado. He mentioned the memorial service to be held later that afternoon and that President Obama was going to be speaking.

There was one voice from around the back of the church that went, “Whooo,” and then that person stopped, as no one else joined in. Other than that, there was dead silence. We all sat there like frogs on logs, and since we’re Pentecostal, that’s not as common as you would think if you’re Episcopalian or something. We didn’t boo or hiss, because we’re in church and not at some political function and the atmosphere around here is pretty sober right now, but a visit by the President of the United States didn’t even merit a mild hand clap of pleased.

We did have one moment of cheering, when the pastor mentioned that the Patriot Riders had roared by his office, one after another after another, earlier that morning in preparation to protect tornado victims against the morons from Westboro. He (and I) refuse to associate them with a church or religion. They’re just attention seeking publicity hounds. Anyway, we did clap and cheer for the Patriot Riders, because we love our patriots no matter the weather damage.

But back to Obama and the memorial service, I don’t know if you saw it or not, but Pastor Aaron Brown, of St. Paul’s United Methodist, did a magnificent job and was well received and appreciated. Gov. Jay Nixon did fine and was well received. Obama’s speech was canned, trite and degenerated into standard applause lines. It was a flop. His visit has not prompted any kind of excitement or praise.

As a matter of fact, a friend of mine texted me this sentiment that I believe is shared by a vast majority of us: 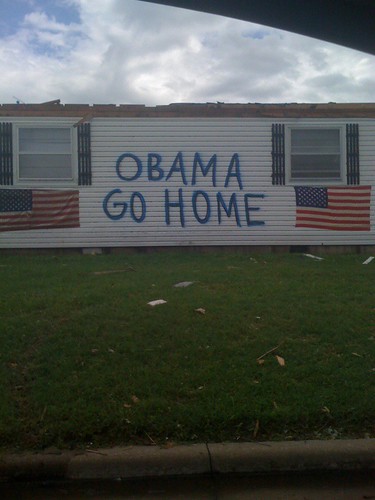 Queen Hotchibobo
I was born in Saginaw, Michigan, and I grew up in a house on Saginaw Bay. My daddy was a poor, hardworking Saginaw fisherman. Too many times he came home with too little pay. Naw, not really, but it sounds more interesting than the real bio, so there you are.
Previous articleBill Clinton throws ObamaCare he helped pass under the bus
Next articleThe Cello Sings Harmony, PFC John C Johnson, RIP