Promoted by Pilgrim because we need to see what happens here.

This column was first generated at my website on 27 April shortly after 9pm Eastern and has since expanded to what you’re about to read.

Updates to the original posting are noted and in sequence of date and time. A few things were tweaked for placement here at Unified Patriots.

Numerous updates on 29 April, including The UN finally sticking their noses into a place where said inhale/exhale units will get chopped off quite quickly and violently.

JPost: “Our plan does not involve negotiations with Israel or recognizing it.”

This video clip is from the EuroNews wire service.

Hamas invites Abbas to Gazaâ€¦â€¦ and threatens to kill him if he shows up.

He didn’t go to Gaza. He went to Cairo, because The Muslim Brotherhood ordered it. They ordered Hamas to Cairo as well and that they’d better leave Abbas alone, because they’re all – as in all Muslims – one single entity with the same goals.

Abbas would give up US aid to reconcile with Hamas.

Hamas is officially listed as a terrorist organization. Therefore, the administration is now required to immediately cut off all aid to the newly combined Palestinian Authority – Fatah – Hamas a.k.a., The Unity Government.

Our laws and regulations mean nothing to the Marxist Jihadis in the administration and not only is it more than likely US aid will continue, the dollar amount and additional items sent will quite probably increase exponentially in breadth and width.

Egypt to Hamas: Câ€™mon in, the waterâ€™s fine.

We pride ourselves on being pretty prescient around here at Unified Patriots and Israel Survival Updates. But it really sucks to be right on many predictions, because what’s visibly obvious to be coming next is what we’ve been saying all along (and doing so well before an all-encompassing ‘big picture’ column was published in mid-February) showing a snapshot in the timeline of the ongoing build up to the unthinkable……

Sixty-One percent of Americans support defending Israel if it is attacked.

The other thirty-nine percent are the danger, because that’s the administration, media, J-Street and outright anti-Semites.

Israel is on her own.

Approximately 11am Eastern on 28 April.

“Hamas is part of the Palestinian people. I cannot ignore them. They are a part of us and Netanyahu is our partner. We donâ€™t want to choose between the two.”

Abbas is finished. The choice was made long ago by peace lovers who prove they love peace much more than Abbas does.

The Muslim Brotherhood wants and will accept nothing less than the elimination of Israel and Jews. With this unity agreement, Abbas again calling Netanyahu a ‘partner’ has sealed his fate.

Abbas was cut out of the process and may have never even been considered to be a part of it, because he does negotiate with Israel.

How evil is The Muslim Brotherhood ?

They cut out Abbas and he was Arafat’s hand-picked replacement.

Restructuring and unifying security forces in Hamas-run Gaza is a key condition for the success of the accord, brokered by Egypt on Wednesday to overcome a rift that had stifled a Palestinian drive for independence.

Let’s re-write those paragraphs to be a tad more factual.

Restructuring and unifying the individual groups in Palestine is a key condition for the success of the pending Caliphate, being built by The Muslim Brotherhood to overcome any possibility of stifling the drive to official statehood for Palestine and provide the pathway for the soon-to-be elimination of Israel and all Jews world-wide.

Imagine what will happen when they usher Hizbollah into the fold.

The Palestinian government remains in place despite a reconciliation deal between the two main Palestinian factions and US aid continues to flow to it, US State Department spokeswoman Heide Bronke-Fulton said on Thursday, saying it would review aid if a new one is formed.

If it’s not instantly obvious to you, here’s what the oh-so-friendly-to-Israel Obama administration will demand in order to “reconsider” sending all that aid to the genocidal Muslims:

If Israel wants America to even consider cutting off aid to it’s new peace partners in Palestine, then Israel will need to immediately and permanently evacuate all citizens from Palestine’s territory.

Ex-Ambassador to Egypt, Sweden and Romania Tzvi Mazâ€™el: We must deal with this on the diplomatic and informational levels……

I’m tired of listening to you talking in rhymes.
Twisting round to make me think you’re straight down the line.
All you do to me is talk talk……

Deputy Foreign Minister Danny Ayalon: Let us not scare ourselves with ungrounded theories. The Palestinian move for unilateral recognition is a threat with nothing behind it, and will not serve the Palestinians.

Danny Dayan, Chairman of the Yesha Council of Jewish Communities in Judea and Samaria: While the Palestinians claim this area with lies and distortions, we must present the People of Israelâ€™s unshakeable claim to its homeland and its intention to actualize this right. But if the Arabs talks about national rights and Israel demands only security, the game is lost from the beginning.

David Wilder, Spokesman for the Hevron Jewish Community: The conflict between Hamas and Fatah [never had] anything to do with ideology. Both agree that the state of Israel is an insufferable thorn in the collective throats of the Arabs that must be plucked out of existence at the first opportunity. Abu Mazen (Mahmoud Abbas) certainly hasn’t changed his life’s philosophy, which he expressed while planning the 1974 Ma’alot massacre and funding the 1972 Olympic terror killings in Germany.

Gee, where have we heard that said before — that Hamas and Fatah (PA) have the same goals, just a slightly different playbook to get there and when they’re brought together, Israel will be literally at the brink of being attacked — Oh yeah, it was me…… and I’ve been saying it for the past umpteen years even before the interwebby thing existed for us typical bitter clinging civilians.

Again, imagine what will happen when they usher Hizbollah into the fold. 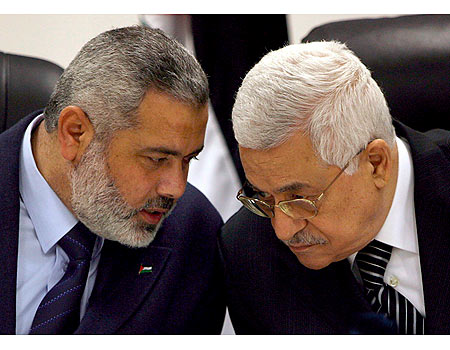 Haniyeh said that there was no justification for recognizing the “Israeli entity” in wake of Israel’s objection to Palestinian rights and unity.

“Their presence on our land is illegal and cannot be recognized,”the Hamas leader said.

Earlier, Haniyeh stressed that the temporary Palestinian government to be established following the unity deal will not embark on negotiations with Israel. He also made it clear that his group had no intention of recognizing the Jewish state.

Compared to the peace lovers taking over, Mr. Abbas is a knight in shining armor, kitten-in-a-tree-rescuer and all-around good egg.

The Agenda 21 maniacs finally weighed in.

“The Secretary-General welcomes efforts being made to promote Palestinian reconciliation and the important contribution of Egypt in this regard,” UN spokesman Martin Nesirky said in a statement. 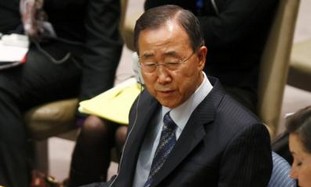 “He hopes that reconciliation will now take place in a manner that promotes the cause of peace, security and non-violence,” he said.

To give UN Sec. Gen. Ban Ki Moon the nickname “Tommy” is easy, but he’s not deaf, dumb and blind. Not even close. What he is happens to be the current boss of The UN, who is on their own ‘Jihad’ in the form of Agenda 21.

What’s that agenda thingy you ask ?

UN Agenda 21 is the combination of ICR2P and ICLEI, plus several other lovely alphabet-soup acronyms of UN agencies and NGO’s.

ICLEI = The International Coalition For Local Environmental Initiatives.
a.k.a.: Green Totalitarianism on a local level in your day to day life.

ICR2P = The International Coalition For The Responsibility To Protect.
a.k.a.: One-World Governance Totalitarianism.

Yes, I see you nodding your head you remember that R2P term from when the Libya mess kicked into high gear. But ICR2P and ICLEI have been around much longer and unless you’ve been following a few of us around the block and have done some research, they’re much more dangerous than you may realize or think.

Have a look at this Israel Survival Updates column from March 25th: The Responsibility To Protect.

It’s a really good bet The UN honestly believes they can control the peace lovers as part of their building one-world government.

If it wasn’t so damn dangerous – world war kinda dangerous – it would actually make for some great comedy.

The Muslim Brotherhood is bringing about the consolidation of Muslims under one Caliphate with full-on Shari’a law in place and the instant they’re able to do so regardless of that status, Israel will be attacked en-masse from all directions.

Based on history since 20 January 2009, it makes one wonder what – if anything – the current administration in Washington DC will do when it happens.

Kenny Solomon
Israel Survival Updates
Everything I need to know about Islam I learned at the age of 13 on September 5th 1972.