Final Jeopardy at the Mexican Border

Alex: and the answer is ‘Their lips are moving‘

speciallist: What is ‘how do you know when a Democrat is lying?‘

Alex: that is Correct!

She’s great isn’t she? Everything is subiendo rosas at the southern border. And while the roses are coming up, the number of illegal crossers are going down. In fact there’s not much to do down there except watch the fence rust. It’s so quiet that ‘agents have been left glassy-eyed amid a steep drop in activity.’ At least that’s what the LA times wants you to believe.

He pounded energy drinks. He walked around his government vehicle. On the other side of the fence, the bars in the Mexican town of San Luis Rio Colorado closed, and only the sound of a passing car broke the silence. Byerly, 31, switched on his DVD player. Minutes later, a supervisor knocked on the window: The slapstick comedy “Johnny English” was on; Byerly was fast asleep.

speciallist: What a crock of shi..

Alex: What was that speciallist?

Alex: and the answer is ‘Nobody knows.’

speciallist: What is ‘the difference between Karl Marx and Obama?‘

Now wait a second. Haystack was down on the border just this morning and he reported that the Obama administration is telling the Border Patrol agents to NOT arrest or apprehend illegal aliens. 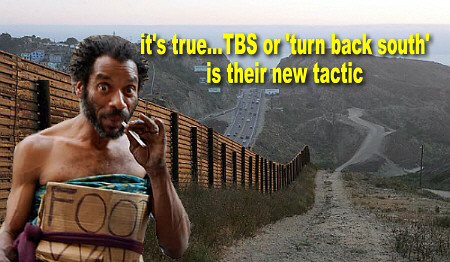 Could this be possibly affecting the rosy numbers being reported by the leftist media and the Obama administration? (oops, that’s supererogatory)

An Arizona sheriff has come forward, saying that he has been told to stop arresting illegal aliens…the sheriff “has been flooded with calls and emails of support from local and federal agents who back his claims that the U.S. Border Patrol has effectively ordered them to stop apprehending illegal immigrants crossing the U.S.-Mexican border.”

Alex: OK we have time for one more….and the answer is ‘the democratic convention.’

Alex: wow speciallist, your on a roll

Alex: we’ll check with the judges…Absolutely correct! We’re out of time but we’ll continue tomorrow with speciallist in the lead!

4 responses to Final Jeopardy at the Mexican Border