Thank you, thank you. I’m here all week.

Late Wednesday evening, Kraken Kitty was unleashed on those feckless, hopeless Keystone Kop union thugs in Wisconsin, who thought they had sneaked, finessed, and finagled their way into a razor-thin electoral theft in the Supreme Court election. I mean, those girls were all giggly and giddy, and were headed off to the bars to pick up burly lumberjacks and party the night away. Remember, this is the same bunch of flee-baggers, paid rioters, and rent-a-ho gangsters who failed to intimidate the duly elected legislature and governor out of their plan to smack public-sector unions on the nose with a rolled up newspaper.

I told you at the time that such a laugher did not call for The Kraken to appear. My little Kitty would suffice for this occasion. I don’t mean to brag, but I am a lazy beast, and can only be troubled to come up from the deep to destroy the real villians. Not mean Catholic school girls in plaid skirts. 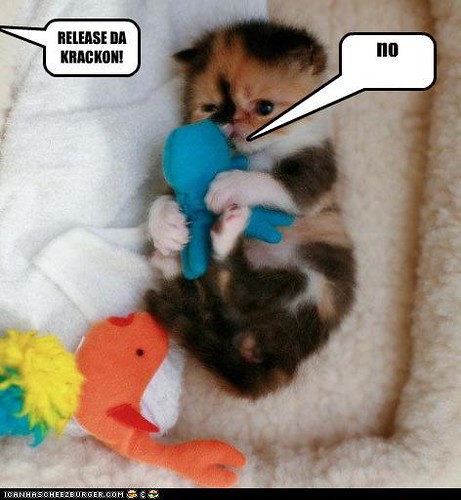 Less than 18 hours after Kraken Kitty rolled out his campaign of mayhem and destruction…….. the Madison cityscape looks like a yuppie Beirut — littered with crushed and burnt Priuses, Vespas, and Dumb Cars™, and thousands upon thousands of burned carcasses of Democrats, LSD-addled college students, left-media prostitutes, and union thugs.

Next time, you freedom-hating commie pukes, better bring your A Team. Our B Team picks their teeth with the splintered bones of your B Team.

The Editors
To beast or not to beast.
Previous articleThe Face of Young Conservatism
Next articleBLAP (Blog Long and Prosper): Images for Blogging