His name is Yohannes Damka.

Mr. Damka is an Israeli citizen who simply wanted to enjoy the vacation he dreamed of for his entire life.

Excited and full of expectations, he left for Canada on march 21.

When he reached Frankfurt, however, things started to go wrong.Â Â  Before he could board his connecting flight, he was picked up by the German border police on suspicion that he was carrying a fake passport, and was not, in fact, an Israeli citizen. 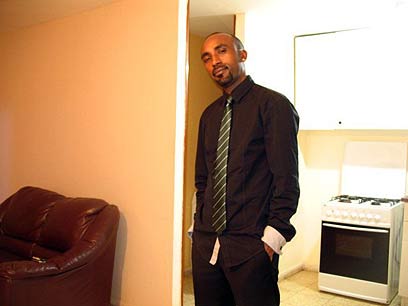 “They caught me like a common criminal and cuffed me in front of everyone,” he said. Â  “They lead me to a tiny, empty room, and did a full-body strip search. After that, they questioned me for eight hours.“

Damka noted that he demanded to speak with the Israeli consulate, but his pleas went unanswered. Â Â  “No matter what I said, nothing helped,” he said.

So at what point to completely normal and decent people like Mr. Damka take matters into their own hands, even at the cost of their freedom and possibly their life ?

At one point, one of the investigators called out “Juden, Juden” and then made a noise of disgust. Â Â  “I was furious,” Damka said.Â Â  “Four cops had to hold me back from hurting her.”

It’s not going to take much more than what happened to Mr. Damka.

Please click on the link and read the full article at Ynet News, as there is much more to Mr. Damka’s adventure than the excerpts here.

I’d like to meet Mr. Damka, shake his hand and offer a toast to freedom.Â Â  Not the ‘new civility and tone’ of freedom.Â Â  Real freedom, which comes from standing your ground for what is right and just – no matter the odds, no matter the arena.