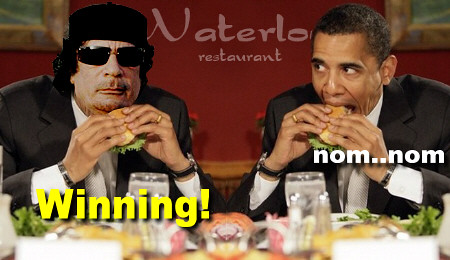 We already know our Congress critters are a couple fries short of a Big Mac Meal. Turns out, so is Muammar Qaddafi.

The Libyan leader has vowed to annihilate the rebellion, along with a few innocent citizens, with a final assault on the opposition capital of Benghazi.

But Resident Obama has other plans…from his speech today:

Now, here’s why this matters to us. Left unchecked, we have every reason to believe that Qaddafi would commit atrocities against his people. Many thousands could die. A humanitarian crisis would ensue.

The entire region could be destabilized, endangering many of our allies and partners.

The calls of the Libyan people for help would go unanswered. The democratic values that we stand for would be overrun.

Moreover, the words of the international community would be rendered hollow.

And that’s why the United States has invited Mr. Qaddafi to the Waterloo restaurant for cheeseburgers and a soda.

The UN Security Council voted on Thursday to impose a no-fly zone over Libya and authorize “all necessary measures” to protect civilians from attacks by Qaddafiâ€™s forces.

Speaking of “all necessary measures” wouldn’t you love to have our Speaker of the House just once say, “If the Dems are crazy, we will be crazy too”