Tennessee is not Wisconsin.

You know why? Because when Tennessee legislators create a bill to strip teachers of their collective bargaining rights, they don’t mess around.

Hundreds of labor supporters swarmed the Capitol to denounce a bill to pare back the public union fleecing of Tennessee’s treasury. State Troopers were waiting.

Even FDR, the granddaddy of wealth redistribution, was solidly against public sector unions having the ability to basically bribe politicians with campaign donations in return for unsustainable health, retirement benefits and wages.

From a large crowd of obviously jobless people, seven were arrested when they stood up during a hearing and began chanting “union busting”

Most demonstrators left the hearing room after about 30 minutes, but a small group tried to lock arms to keep from being removed. Troopers pulled the holdouts out of the room one by one, while lawmakers, lobbyists and other observers looked on.

Lt. Gov. Ron Ramsey was the first lawmaker to email a statement to media on the protests, enjoy…

‘The right of all citizens to protest and assemble peacefully is sacred in the State of Tennessee. However, this General Assembly will not be intimidated by nomadic bands of professional agitators on spring break bent on disruption. We talk through our differences here. Tennessee is not Wisconsin.’

“..nomadic bands of professional agitators on spring break bent on disruption” Aren’t they suppose to be drinking, hanging out at the beach and Sexting?

Some of those kids could be graduating this year. Thank god they’ll soon be working and they won’t have time to interrupt the Tennessee legislature as they conduct their business…oh wait..

Unemployment, as measured by Gallup without seasonal adjustment, hit 10.3% in February — up from 9.8% at the end of January. The U.S. unemployment rate is now essentially the same as the 10.4% at the end of February 2010. 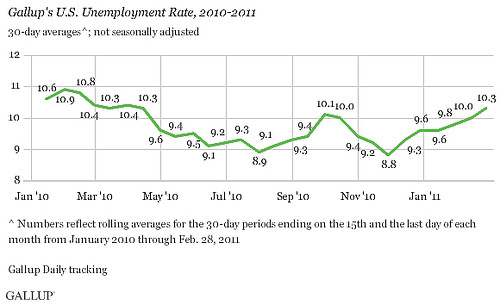 3 responses to Tennessee is not Wisconsin.