I can smell Chicago from my Porch. 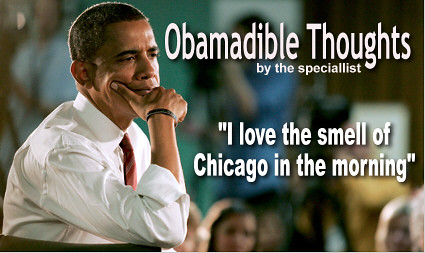 ‘The judicial Power of the United States shall be vested in one supreme Court, and in such inferior Courts as the Congress may from time to time ordain and establish.’

Do you see anywhere in that statement that either the Congress or President shares judicial power with the court. Did I miss it?

The Obama administration told the Supreme Court on Monday night it should stay away from a high-profile challenge to the 2010 health care law until after a lower court has had a chance to review the case.

The Won seems to think we no longer need the Constitution. After all, it was written over a hundred years ago.

Delay, dither, disassociate and defy and when that fails, Bully.

If this challenge follows the business-as-usual process of appeals before a SCOTUS review, the process may take years and that’s exactly what the Whitehouse anticipates. That so many people will have been enwrapped into ObamaCare, that it will be impossible to withdraw ourselves from it.

Resident Obama and his cronies are so utterly convinced of the health care laws constitutionality, you would think they’d welcome a fast-track opinion on the law and a hearty thumbs-up from the Supreme Court.

No. Their wish is the more time that passes, the less likely SCOTUS will rule against it.

If you hadn’t noticed already, this is being done with the assistance of the Republican non-leadership. Boehner, Cantor, McCarthy, etc. Worthless turds.