Mitch Daniels suffering by contrast with Walker and Kasich

The public labor union bullying of the elected legislature and governor continues in Wisconsin, where Scott Walker stands resolute in his plan to balance the budget not only this year, but also for the future. Gold plated union pensions and contracts negotiated through an incestuously corrupt process threaten to bankrupt the state in the near future, and have created a $137 million deficit this year and a much larger one in the next 2-year budget cycle. Democrats in the legislature ran away from the state senate rather than participate in the democratic process. The protests are also fundamentally anti-democratic, as they seek to overturn the results of a democratic election by bullying the legislature. Republicans in the Wisconsin state senate have upped the ante: introducing fast track Voter ID legislation to prevent some forms of vote fraud and call Democrats’ bluff. It remains to be seen if Democrats rush back to the statehouse in order to protect the right to commit vote fraud in Wisconsin. Democrats traditionally favor the “right” to commit vote fraud as well as the “right” of state workers to conspire with friendly Democratic state officials to negotiate sweetheart union deals in return for kickbacks to reelection funds. When these two cherished Democrat Party values are put up against each other we’ll see which one wins. Obama has already backed off early White House and DNC support of the Wisconsin rabble rousers. The protests are borderline violent, with actual locals supplemented by revolutionary communists and socialists bused in from out of state. The tone of things is most definitely not civil, with union supporters, communists, socialists, and various revolutionary rabble rousers making the most bloodcurdling threats imaginable and comparing every Republican in sight to Adolf Hitler. The public perception of union demands has suffered badly. 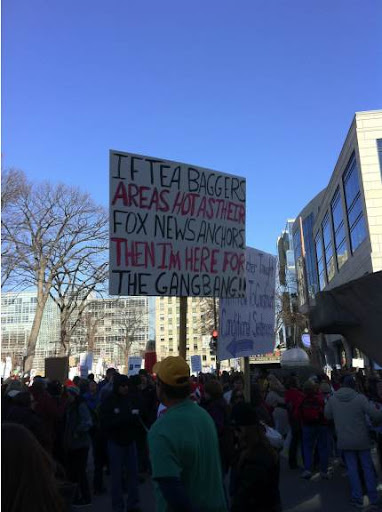 Do not be sad or feel left out. You will also get a chance to see unions in revolt in your state. The SEIU’s purple people beaters are coming to a town near you! They aren’t just visiting Wisconsin, but will be marching all over America to intimidate their political opponents.

Among other fiscally sane ideas anathema to Democrats, Ohio governor John Kasich and the overwhelmingly Republican Ohio legislature are also pressing right to work legislation and cost cutting of gold plated public union contracts that threaten to bankrupt that state. Unions threaten to turn out twenty thousand union supporters Tuesday for another borderline violent protest like the ones in Wisconsin.

Indiana also has its own problems with gold plated union contracts threatening the financial future of the state. Like Wisconsin and Ohio, prompted by disastrous state budgets and unemployment numbers, the voters elected overwhelming majorities of Republicans in the statehouse and gave the governorship to Mitch Daniels. Now Daniels, who seems according to the tea leaves to be running for the Presidency as a one-legged-stool (fiscal only) Republican, doesn’t want to push HB 1468 (The Right to Work Bill) or any other legislation that claws back gold plated benefits from public employee unions. He makes excuses that he didn’t run on Right to Work as a campaign issue in November. The unions are revolting in any case. Frankly, I’m not sure why Daniels is paying any attention to union demands. There is nothing for Republicans in coddling unions. Union elites will continue to drain away union pension funding and give it to Democrat campaign funds, hoping for government bailouts at some time in the future to make good the pensions they stole behind workers’ backs.

Kasich and Walker know what needs to be done. They are doing the smart fiscal thing.

I think Daniels, who claims to be a fiscal conservative, knows the right thing to do. But he seems to be convinced that he shouldn’t do it because… because… because… I have no idea why he thinks this. He happens to be wrong. He might not have run on forcing public unions to be responsive to the voters and their pocketbooks, but that’s why the people voted for him. They understood this conversation was happening nationally just like everyone else did. Everyone, that is, except for Daniels. If Daniels claims to be a fiscal-only conservative and demands that social and national security conservatives shut up and be quiet about their principles, he will never inspire anyone in the presidential contests coming up. And now he isn’t even doing the fiscal conservative part right! He will not be electable if he persists in this ill-advised political triangulation.

UPDATE: Teachers are the focus of Daniels’ other education reform plans for Indiana. Among his plans are expanding charter schools, offering vouchers, and restricting the ability of teacher contracts to expand relentlessly, forever. Teachers have already been playing hooky in Indiana in order to protest these moves. And one of the first moves Daniels made on coming into office in 2005 was to rescind the license of state workers to collective bargaining. He didn’t run on this change in 2004, but made it anyway. Given this, it’s not clear why he is resisting a right to work law this year.

Someone at Daniels’ ear needs to advise him that he needs to behave like a fiscal conservative, not like a Clintonian Democrat trying to claim the center. Otherwise he will doom his candidacy with Johnny McMaverick style centrism before he begins. And that leaves out his rejection of the other two legs of the three legged stool that supports conservatism as a governing ideology.

Further: The bailout mania of the idiotic US government in 2008 and 2009 does not bode well for political backbone when faced by the bankruptcy of the majority of labor unions in the country. It’s a sure thing that unions will squeal loudly when they have to pay out on pensions. Unions have been stealing pension money without worker approval to play political games for years. When this theft comes to light union leaders will cry to the heavens for help, claiming they didn’t know. Taxpayers, having already payed a monopoly premium for union work, have paid for these pensions once. Taxpayers must not be held liable for theft committed by union elites in the past, today, or tomorrow. Union members need to hold their leaders to account today, before these accounts come due leaving them completely without pensions: forced to subsist on Social Security.

That would put an exclamation point on the union-sponsored betrayal of America’s manufacturing workers for the last 50 years, would it not?

And we Republicans must stiffen the backbones of the officials we put in office. They did not get put into office in order to coddle union elites or bail-out thieves. That socialist practice of bailouts must end, no matter what business the thieves are supposedly in.

beaglescouthttp://beaglescout.wordpress.com
Twitter: @beaglescout #NotMyImpeachment
Previous articleState Of The Union
Next articleOh by all means, Mr. President, give this poor guy another chance